No, Rubbing Vicks Vaporub On Your Feet Does Not Prevent Coughing

Unless your feet are coughing, in which case you might have a different problem. 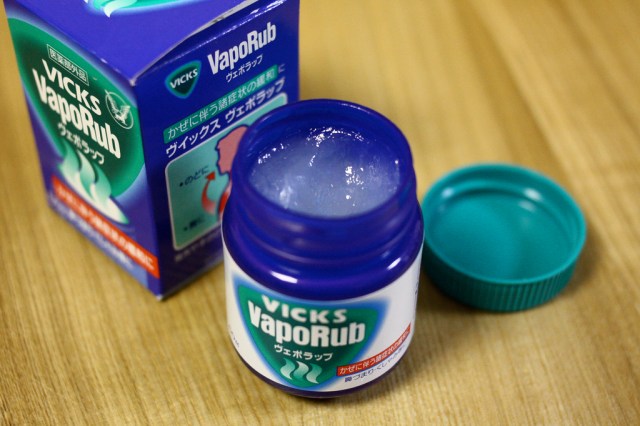 It’s nowhere near the level of the now infamous “privacy notice status update” yet, but we’ve started to see a disturbing trend of people on Facebook telling each other that rubbing Vicks Vaporub on your feet works to prevent coughing. Yeah, your feet. Normally we wouldn’t think we’d need to explain why that’s not right, but

This is the specific status that we’ve been seeing. Sorry if you’re one of those people who posted it. We’re just trying to help.

Some people have used Vicks Vapo rub for years for everything from chapped lips to sore toes and many body parts in between. But one usage is getting a lot of attention lately because studies show that it works 100% of the time. Although scientists discovered this remedy, they are not sure how or why it works, but it does. And it works everytime. To stop night time coughing, you put Vicks Vapo rub generously on the bottom of both feet at bedtime, then cover with socks. Even persistant, heavy, deep coughing will stop in about 5 minutes and will stay suppressed for up to 8 hours of relief. Studies show that it is more effective in children than some of the strongest prescription cough medicines on the market today. In addition, it has a soothing and comforting effect that brings on a sound and peaceful sleep.

The first clue here should be the claim that it works “100% of the time.” The second clue should be that you saw it on your second cousin-in-law’s friend’s Facebook page.

This isn’t a completely new hoax — it first surfaced as part of a chain e-mail in 2007 and also once claimed that the unusual method had been verified by the Canadian Research Counsel, which is not really a thing. The National Research Council of Canada, which is a thing, had to come forward with a statement saying that no such study involving Vicks Vaporub had ever been conducted at the NRC.

So why has such an odd rumor continued to take hold? Part of it might have to do with alternative medicine’s lingering interest in reflexology, a belief that different quadrants of the feet, hands, or ears connect to a corresponding organ or gland in the body, and that applying pressure to those quadrants will have a positive effect on the body. Reflexology has documented roots in ancient Egyptian and Chinese history and is still used all over the world, probably because it feels really nice to have people massage your feet. However, a misunderstanding of reflexology also leads to straight-up silly practices like the “detoxing ” foot pads or spa baths that are supposed to draw all the impurities out of your body through your feet, but which clearly don’t because that’s impossible.

The menthol in Vaporub does have some soothing abilities on its own, but it’s most effective for coughing and nasal congestions when it’s close enough for you to actually breathe it in. That’s why they recommend putting it on your chest, because there the vapors are actually able to travel into your nasal passages. Your feet are nowhere near your nasal passages. Therefore, it’s probably not going to do a whole lot for you.

If you just like the feeling of mentholated goo on your feet, have at it, but don’t go too overboard with the stuff, especially with young kids — Vaporub contains an ingredient called camphor, which the New York City Health Department believes can be hazardous in larger doses. Vaporub, as with all medications, should only be used as directed.

And remember: if you see something that sounds too good to be true on the Internet, you should really do a Google search before you pass the information on. Snopes is your friend, guys.

(via Snopes, image via Tatsuo Yamashita)