Veronica Osorio Shoots for the Moon | The Mary Sue 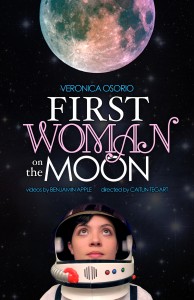 We at The Mary Sue like following funny ladies, and when they also turn out to be geeks, we let loose a girlscream of joy. That’s why we’re very excited to be featuring Veronica Osorio, a sketch and improv performer at the Upright Citizen’s Brigade Theater in New York City who is debuting her first one-woman show, First Woman on the Moon. She plays five different American women, all of whom are competing in a “Willy Wonka-style contest” run by NASA to become the first woman to walk on the moon. Osario, also appears in the web series Vag Magazine (about a fictional hipsterific women’s magazine) and performs with the UCB house sketch team Fambly. She previously performed in the show This Is About Smith, which was an official selection of SketchFest NYC. From the official synopsis:

Join a cantankerous grandmother, a prostitute turned business whiz, a depressed mommyblogger, an energetic tween, and a visionary as they ponder a lunar life.

And she also wrote this solo show. If you’ve ever wondered what it’s like to write five characters for yourself and why you might see someone in a coffee shop suddenly spout profanities or something about a “crotch photographer,” then you will have a better understanding after reading this interview. And on that, may we present — Veronica Osorio!

TMS: This show is about women and the space program. Are you a space geek, and/or have you ever fancied yourself an astronaut? If so, what changed your mind?

VO: Being an astronaut and going to space are of my biggest fantasies even more so as a grown up than when I was a kid however, I think I am more of a science geek than just a space geek. I LOVE science, science fiction, space, genetics, biology, zoology, sociology even … all of it and, since I know I ain’t becoming a genetic engineer anytime soon, I fantasize with performing any role in which I have to wear a lab coat, space suit, pilot’s cap or all of the above.

I am not a fact-memorizer or a sci-fi media reference library because I am terrible at remembering names, dates, etc. Except maybe for Battlestar Galactica … I get all up in BSG‘s wiki every time I think of the show (often), but I am both fascinated by the production aspects of the show and the actual universe of it.

TMS: When you were writing this, were you ever considering other movie-themed contests for NASA to run? How did you ultimately decide on a Willy Wonka-style contest as opposed to, say, a Deer Hunter-style contest?

VO: I knew I wanted a contest but I wanted to justify that any loony would’ve won it, so I could have fun with my characters, and, although not all my characters are insane, they’re definitely not the type of people that would pass every test required to be the FIRST woman to ever go to the moon and certainly not ones you’d choose to go there … Except Astronaut Veronica. She’s qualified but not “Common American Female” enough, so she doesn’t serve the political purpose of the contest.

The Willy Wonka-style has that happenstance aspect + certain magic to it, there’s something off about a contest that puts such high stakes on the shoulders of luck.

About other style of contests … mmm maybe not, but I did recurrently think of American Idol and giggle.

TMS: Is this your first one-woman show, and how has this experience been compared to working with sketch and improv groups at UCB?

VO: This is my first one! It’s very different, writing a whole show on your own kind of makes you feel crazy, especially if you’re writing to perform it yourself. I’d have intense “But … who am I? What’s my voice?” moments and then respond something like “I am James Kook, crotch photographer” out loud so everyone in the coffee shop would move away from you. I felt really lonely. Writing for other people is way easier, especially if you know them really well.

In a Maude team [a UCB house sketch group], you have other creative, funny people there, it’s fun! You throw an idea out there and it becomes a bit and then either grows into a sketch/character or becomes that thing everyone would make fun of you about forever. Also rehearsing you get to enjoy all the other performers, and it’s really easy to break the ice and jump into it immediately because before you realize it, they’re all onstage being funny already. Entering a room to rehearse on my own meant just sitting there during the first half-hour not knowing how to break my own ice.

TMS: Are any of these characters based on real people? Did any characters not make the cut? If so, is it because they had Meniere’s disease and would have never been fit for launch anyway?

VO: Haha they’re all not-fit for launch! These five women are not common, suspiciously American, and not at all what you’d imagine as qualified. Before having a concept I created a list of 100+ characters that I pitched myself, many of them being things along the lines of: “#78 Squirrel.” After I had a concept I picked the ones that I had more fun imagining writing, I also wrote a lot of other monologues/scenes that did not make sense within the show, after it had a better shape.

In a way they’re all based on real people. There’s a character who’s a grandma, she’s based on how sad I get imagining my grandmas not being active. (They both are!)

I have a character who’s an author of female fiction novels. She’s based on all those women who think they are progressive and feminist, but actually they’re quite the opposite. No one specifically.

Astronaut Veronica is me, funner, lamer, cooler, sadder, happier, badasser … you get it. [Ed. note: We do.] 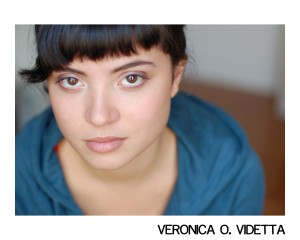 TMS: What do you think Sally Ride would do if she found herself in this situation?

VO: Hi, Sally Ride, I hope you’re reading this, you’re awesome! I think she’d empathize with Astronaut Vero on how frustrating it is to be so banally rejected on her attempts to go to the moon but also she’d take it like a champ, unlike Astronaut Veronica.

TMS: Have you thought of a theme for your next project (one-women show, sketch show, etc.) yet? Do you think it will be similarly geek-themed? OMG, will it have dinosaurs?

VO: I am resuming writing my original series which is definitely geek-themed and soon I’d like to write a more eclectic type of show for an ensamble … you see although I like space maybe I also like The Little Mermaid. I am also finally focusing on my stand-up which is basically me, stating facts … I’m real funny, you gals! All of my projects will have AT LEAST a dinosaur roar in them.

TMS: What can you tell people who are not in the area to see it? Are you bringing the show to other locations/venues?

I am performing only at the UCB Theatre NY for now, but of course I’d love to take it out to UCBLA and other cities and of course festivals!

NOW If you come from out of town JUST to see my show and are clearly not a creep, I’ll take you to the best donut place ever and give you a juggling lesson in Spanish.

TMS: Anything else you would like to add about you and/or your show?

I feel so excited and honored that my first solo show ever is at UCB Theatre and nothing less, I’d love people of all genders to check it out!!

The weird thing about this is that it feels/seem like a lonely process, but it isn’t at all! At least not in the UCB community. You’re the one who has to believe in it the most and love it the most and then that will get people excited about it. I felt like that for First Woman on the Moon.

Both Cailtin Tegart, director of the show, and Benjamin Apple, who directed the videos and designed the posters, helped me a lot in every sense. Some jokes are theirs, or they’d help me twist my jokes, or I wrote based on a bit that we did while talking about the show. They helped me shape the show a lot! Benjamin’s input in the videos has made them so much better than I even imagined they could be, and Caitlin’s easiness to pitch jokes that my character would say made it the show it is right now.

I had Tim Dunn help me choreograph the beginning of the show and he went above and beyond to find the right song … The people involved in the videos are my teammates, teachers, peers … and not a single person refused to help, and it was beautiful.

Writing/performing a solo show sometimes feels great and sometimes horrible. I wanted to quit and thought it was dumb, and then it felt so awesome and like I rock (that’s still an expression, right?) but ultimately it’s about having fun and getting to play around, about getting to embody all those people that you always wanted to be out of admiration or hate, you know, THOSE people that do something in you so just keep writing.

Thanks so much, Veronica!

First Woman on the Moon debuts tonight at 7:30 PM. If you are indeed in the NYC area, we suggest you reserve your tickets at the UCB web site.