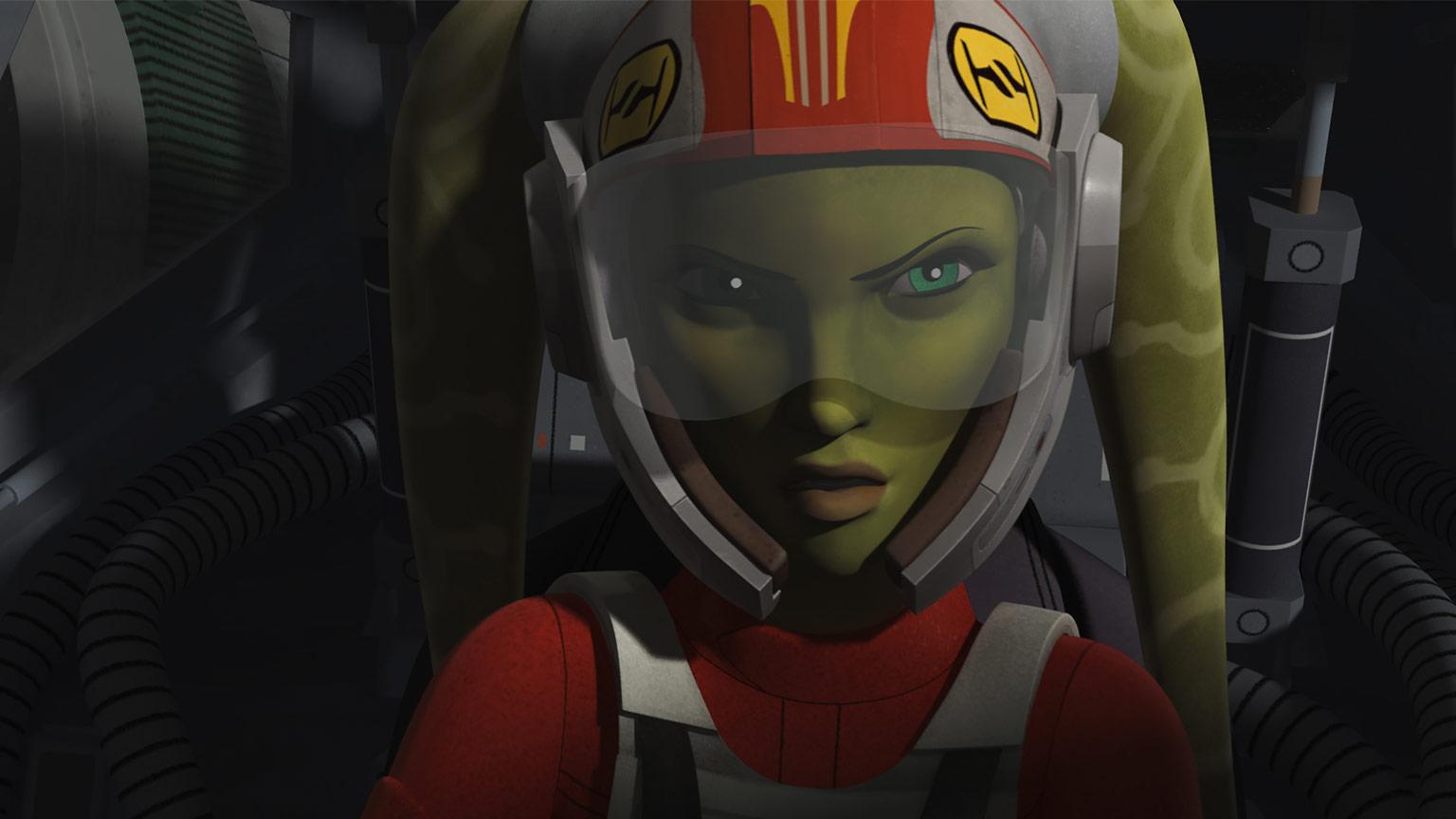 If there’s one character who I adore beyond measure in Star Wars Rebels, it’s Hera Syndulla, played by the equally inspiring Vanessa Marshall. Hera is everything you could ask for in a strong leader character. She’s collected and capable, full of compassion and empathy, yet willing to do whatever it takes to ensure the galaxy is freed from tyranny. My twitter bio literally states that I’m just trying to make her proud. If women built this Rebellion, to quote the fabulous docu-series Looking for Leia, then Hera was leading the charge.

I had the privilege of speaking with Ms. Marshall prior to the release of Rebels season four, on Blu-ray and DVD today. We chatted about Hera, piloting, romancing Kanan, and the messages kids can take away from the show. So jump in, get to know our favorite Twi’lek pilot a little better, and then go grab a copy of season four to experience the show one more time.

Be warned, the interview contains some massive plot spoilers for season four.

TMS: In the pilot, Hera tells Ezra that if all you do is fight for your own life, then your life means nothing, and that is a major theme over Rebels’ four seasons. How does Hera’s journey reflect that quote?

Vanessa Marshall: Oh man … it absolutely reflects that. She has given everything to fight for the lives of others, and would gladly do that over and over again. I think she practices what she preaches, and I think when she loses Kanan, she’s at a loss for how to proceed in that fashion—not for lack of trying, but just because she’s simply so at a loss.

She’s lost her way, I would say, but that’s understandable given the grief. Ultimately, as a group, they’re able to heal and turn it around, and I think they do a fantastic job, as a family unit, of healing that pain. I was pretty impressed with how they brought it back around, to continue to commit to the cause at hand. I see that as the most prevalent of worldviews in Hera’s little journey from season one to season four.

TMS: What was particularly exciting or unique about playing Hera over the course of these four seasons?

Marshall: Well, I’ll tell you: My father is a pilot, and I have always admired his ethical awareness of the world around him. There’s a decency that pilots seem to embody that is just lovely. I enjoy going out to the airport with my dad, and there’s something very spiritual and very grounded, at the same time, about the men and women out there who take to the air.

I really identified with that. My favorite episode was “Wings of the Master,” and not only because she gets to fly a B-Wing, but we really get insight into why Hera flies and why it’s important to her. I think Dave Filoni did a wonderful job of capturing exactly what my dad embodied, and that was very dear to me, and I dedicated that performance that day to my dad. When he saw it, he loved it! That was a really special thing.

TMS: I was actually going to ask … Hera’s not only at her best in a leadership position, but when she’s inspiring others, such as the episode “Wings of the Master” or in “Hera’s Heroes,” or just throughout the series. Does she inspire you in any way?

Marshall: Absolutely. Absolutely, she does not get distracted by any of the petty, silly things in daily life. She is so focused on the mission, that a lot of times when I would get distracted, or confused, or take something personally, or wonder if I’d done something or worry about anything, I’d ask myself, “What would Hera do?” And then I know exactly what to do, because I know what she would do. And it’s the right thing. And that’s what I do. That was my slogan: “What would Hera do?”

My other slogan is “What would Freddie [Prinze Jr.] do?” Freddie is so awesome. That guy, he lives without apology. He’s hilarious. He’s such a great father, and he puts his family first. If you’re in any quandary, call Freddie!

Marshall: Interestingly enough, what was on the page and then what we actually saw were often two different things. What we would record, months in advance, I would think, “Oh, they’re not having a relationship, there’s nothing going on between the two of them,” because I didn’t really see it on the page, but the thing is, they can sort of add these nuances after the fact when they’re animating the show, so that I would deny that they were in a relationship and then I would see it, and they would caress each other or whatever it was, and I would realize “Oh my goodness, yes, they definitely have a connection.” I would learn more as I watched the episodes, live tweeting with all my Star Wars family, and then I would finally concede they had an affection for each other definitely.

It was interesting to come to accept their affection, and learn about it in the way that I did, because it wasn’t necessarily something I knew about in advance, and was being coy about when questions were asked. I really, truly didn’t know.

TMS: One of my favorite slogans that’s been in the fandom is “Women built this Rebellion.” So, what is it like playing one of the leaders in the most iconic rebellion in movie history, and standing alongside characters like Princess Leia?

Marshall: It’s the biggest honor I’ve ever known. I’ve been a Star Wars fan since the release of the first film, and I never would have thought that I would have anything to do with the franchise, let alone have the opportunity to portray, like you said, one of the most iconic characters out there. It’s really, and I get emotional about it, the biggest honor I’ve ever known.

TMS: What was your favorite Hera-centric episode or arc, and what were some of the other episodes you really loved looking back on your time with Rebels?

Marshall: My favorite character is Sabine, and I’m a huge fan of Mandalorians in general. Specifically, I loved Sabine’s artwork; I loved how she expressed her rebellious spirit through art, and I enjoyed getting to know Tiya [Sircar], but I also felt there was a lot to explore with Sabine learning to trust Hera. I think in the episode where they had their own mission and they had a heart to heart with each other, that was fun to record and it was really fun to watch.

It really made me feel great because I felt like we got to focus on the female characters in that episode, and we really got to flesh it out more and it meant the world to me, not only because I’m a fan of Sabine, but I think it’s great when they focus on the female storylines. If women built the Rebellion, there are two of them right there! I really enjoyed that episode a lot.

TMS: Sort of tying into the idea of female empowerment, Hera has appeared in Forces of Destiny episodes, comics, and hopefully will be getting her own Forces of Destiny action figure soon. I want to ask, what lessons do you think young girls can take away from Hera’s journey and growth, since Rebels is technically, on paper, a kids’ show, though really, it’s a show for everyone. What lessons do you think the younger audience can take away from Hera?

Marshall: Well, I think it is important for women and men and all of us to find our voices, and to be true to ourselves and to play full out, and sometimes that includes taking huge risks. It is worth it to try; it is worth it to dare to do the right thing and stand up for people who can’t stand up for themselves—anyone who’s marginalized. I think she really exemplifies the value in that pursuit. I would hope that people take that to heart and implement it in their own lives.

That’s sort of what I’ve done with Hera, and that would be a beautiful thing to inspire other women to rise up together and accomplish great things. One of the sentences she says, “We have hope,” is one of my favorites, and I think that it’s not that “I have hope” but “we have hope.” I think there’s strength in numbers, and I would hope—ironically, I would hope—that we can embrace that together, and be empowered. That would be beautiful.

TMS: That ties into another question of mine. Rebels is a story of family, compassion, and hope. Do you think that these are important messages for fans of all ages to hear currently?

Marshall: Absolutely. 100%. I really do. I know all the Star Wars fans that I’ve met, Rebels cosplayers … everyone who I’ve met watches the show as a family. I think each generation and each gender is able to pull something out of any and all of the stories, which I think is lovely. The fact that it brings families together in general is a beautiful thing. Hopefully the Blu-ray will do that! We’ll all be separate but together, fangirl flailing about this, that, and the other thing. I do hope that the blu-ray can continue to bring families together and carry that message from here and beyond.

TMS: I just have a couple more questions. Hera gets a … I hesitate to use the word bittersweet, because she does suffer a great loss, but she goes on to lead the Rebellion to victory, and then she has Jacen. What other stories would you like to see told about Hera, and would you ever consider reprising the role?

TMS: What has been the most rewarding part of being part of both the Rebels family and the Star Wars family?

Marshall: I would say meeting fans, and they are truly friends, if not family, for life. I will never be alone again ever. I was an only child, and I was a lonely Star Wars fan for the first part of my life, and the most amazing thing about this has been connecting to people whom I know I will know forever. We just get each other and it’s beautiful.

I’m thrilled to say that, thanks to Freddie’s YouTube channel “Good Evening and Good Game,” the Star Wars Rebels are continuing to play the Age of Empire Star Wars roleplaying game online, and we can continue to nerd out as a family. You can find those on his YouTube channel if you search for it. Sometimes you just get really lucky, and the cast bonds, and we are that way with each other. I’m excited that, while the show may be over and the blu ray is coming out, at least we’re still connected.