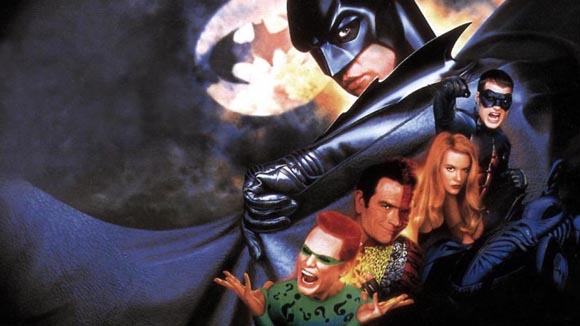 We all have different preferences. Especially when it comes to Batman. You’ve got your Adam West lovers, Tim Burton fans, Joel Schumacher mostly haters, and Christopher Nolan devotees. And of course there’s many who like a mix of those as well but Val Kilmer, who donned the Batman costume in Batman Forever, knows exactly where things went wrong – his film.

I freely admit I love ALL THE BATMANS. Perhaps not equally but I do have room in my life for both the serious and campy versions of the famous DC character. Unfortunately, the world doesn’t really agree with me and films like Batman Forever, as well as Batman & Robin, tend to be universally panned. So much so, another Batman movie wasn’t attempted for almost ten years. And when it was, it had a completely different look and tone.

Kilmer appeared at the Chicago Comic and Entertainment Expo (C2E2) last weekend where he discussed his superhero past.

I think because of Tim Burton’s success on the first film and Nicholson being so amazing that they kind of got carried away with the idea of the bad guy being immune to rules somehow. In the original film the Joker gets the hell kicked out of him and thrown off the bell tower. He suffers, and that sort of went away. Things became cute. It’s entertaining, but I think what they’re doing with the Batman films now is more in the original spirit of the character.

It seems Kilmer is a pretty big fan of Nolan. He also said, “They are doing what I hoped we would do, but didn’t do.” And as for his costume in the film he had this to say:

“The suit takes an hour to get into, and you can’t do it by yourself, and then you can’t hear because there are really no earholes in it. Also you can’t turn your head and you can’t go to the bathroom by yourself. Plus, you fall over quite easily. It was like wearing a wetsuit that was several times tighter than one anyone else would wear, and then when you add the cape it’s almost psychedelic. Then I realized one day what wearing that suit was like. It was, ‘Oh! This is what being old feels like,’ the actor joked. “No one really listens to you any more. You can’t really talk or hear. You’re always falling over and someone has to help you go to the bathroom and get dressed.”

But don’t take that to mean his experience on Batman Forever was all bad. “The cast was pretty amazing, and we spent a lot of time hanging out,” said Kilmer. “So I got to know some pretty interesting people.”