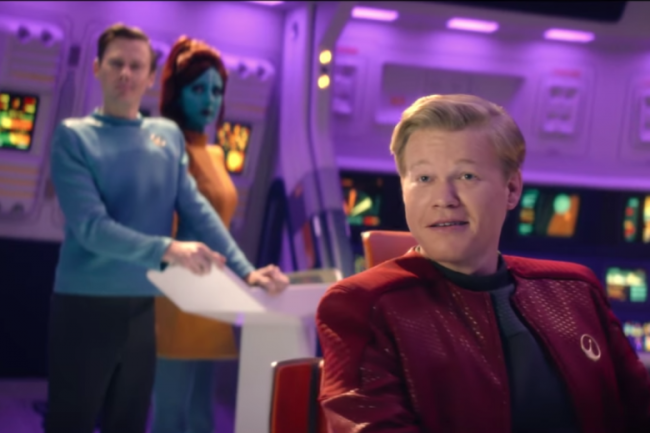 **SPOILERS for the “USS Callister” episode of Black Mirror.**

The first episode of Black Mirror S4, “USS Callister,” is a Star Trek satire that is also an incisive look at toxic masculinity. As a near life-long fan of the Star Trek franchise, it pained me to watch the episode’s disgruntled, entitled fanboy completely miss the point of Space Fleet, the Star Trek-esque show he claimed to love, because he was focused entirely on gaining its trappings, not absorbing its substance.

In “USS Callister,” Robert Daly (played by Jesse Plemons) is the Chief Technical Officer of a tech company called Callister, Inc. that he started and runs with a friend, James Walton (played by Jimmi Simpson). Daly is clearly the brains to Walton’s “face of the company,” as the tech that launched the company was Daly’s creation, but that’s really the only fact of which we can be sure.

We’re introduced to the world of Callister, and everything is filtered through Daly’s lens. The receptionist at the front desk is super-dismissive and never smiles. Another female coworker ignores him completely, brushing past him in the office as she has what sounds like frivolous conversations on the phone. And Walton seems like the worst kind of slick, CEO jerk: ordering Daly around, not respecting his authority as CTO, and then, when a new woman starts at at the office, immediately making a bee-line for her even though Daly is interested.

The new female coder is Nanette Cole (played by Cristin Millioti), and when she introduces herself to Daly, it’s clear that she admires his mind and his coding. While we’re looking at this first interaction from his perspective (and her praise of his work might be as effusive as it is, because that’s how he’s receiving it), the fact is that the interaction is happening. Daly might be filtering it in a heightened way that makes him look amazing, but she is genuinely happy to be working there, and happy to be working with him, because she admires his genius.

It’s true that, as a society, we tend not to value intelligence the way we value other markers of success, and that’s sad. What’s interesting, however, is that these smart toxic fanboys of the world want to be acknowledged and validated differently for their intelligence, but they want to reap the same rewards as the douchebros they resent. Money, women, power, which are all seen as equivalent, even though one of those categories is people.

And so, those rewards continue to be the standard, valued and prioritized by everyone. The sexist douchebros set the standard, and smart, toxic fanboys follow suit. You’d think their intelligence would allow them to see a different way of being and doing things. Alas …

If douchebros are sexist, then toxic fanboys double-down on sexism, if only because they’re sexist and resentful.

And so here, Daly has this woman actively telling him that she admires and respects his intelligence, which should in and of itself be enough. It’s the validation he ultimately wants from Walton and everyone else. But because he’s so starved for (and feels entitled to) validation of his intellect, it becomes heightened in his brain, turning what was likely a genuine but platonic compliment into something that looked like romance.

Except that I don’t even think that Daly was ever genuinely attracted to, or cared about Cole at all. She’s a piece for his collection. Nothing more.

Women are such property to him, in fact, that he’s not even thinking about sex. One of the things he values about Space Fleet is how “wholesome” it is, to the point that, when he creates clone versions of his colleagues and traps them in a Space Fleet game, he doesn’t give them genitals. Women are literal things to him. Things he can kiss (with no tongues) and look at and think are pretty, but they’re such objects to him at this point, he doesn’t even want to have sex with them.

In their first interaction, Daly doesn’t think to ask Cole about her coding, or what she’s into, or any of the other normal things one might be curious about if they actually liked someone. When she asks about Space Fleet and starts touching his old VHS tapes, he’s more concerned with explaining the show to her and getting her grubby hands off his pristine collectibles than he is about her. And he only really gets invested in her once he perceives Walton to be flirting with her.

I know I used this same gif yesterday. But it exemplifies Kirk’s emotions and connection to another, okay?

This is the filter through which toxic fanboys look at everything, even their own fandoms. Toxic fanboys look at something like Star Trek and see “swaggering Captain Kirk,” but will completely ignore the fact that the women that he’s genuinely drawn to are intelligent, competent, very much his equal, and he treats them with respect.

They will ignore the fact that he wrestles with his own contradictions throughout the course of the original series and through the Star Trek films. They ignore the fact that Kirk is actually extremely thoughtful, introspective, and emotional. They admire the swagger, but pay no attention to the nuance—nuance that is very much there and a part of the franchise, but that they are blind to, because that would require them doing the work of getting out from under their own entitlement.

That would require the work of being human beings caring about other human beings, but toxic masculinity only cares about men looking good and powerful. There’s no room for connection, or emotions—even those of the men themselves.

I’m reminded of an interview that J.J. Abrams gave where he talked about the idea that, so often, when people make reboots or sequels, they’re focused on recreating the wrong things, caring more about the gimmick or the pyrotechnics than they do about the characters and the substance of those relationships.

He goes on to talk about Spielberg films like Jaws, which isn’t just a “shark story,” it’s the story of a man’s relationship with his son. E.T. isn’t just a story about an alien, it’s about a family going through a divorce. And yet those films inspired other filmmakers to make similar films that have their trappings and gimmicks, but not their heart.

What’s frustrating and sad is that far too many men can’t see how, if they allow themselves to fall into this toxic way of thinking, they are only hurting themselves. While watching “USS Callister,” I wanted to scream at the television saying, Maybe if you stopped assuming everyone was out to get you and started genuinely connecting with people, more people would actually like and respect you.

At the end of the episode, Clone Walton talks to Daly before sacrificing himself to allow the other clones to go free in the vast Internet. He says something to the effect of, I was selfish, and I didn’t respect the fact that you created this tech, and I might have said I was sorry for that … but you threw my son out of an airlock.

Daly ends up being made a vegetable by his own creation.

And that’s really the lesson here. Daly was creating the very reactions to him that made him so resentful, but he couldn’t see it. This is what toxic masculinity does. It makes men so focused on the appearance of success and strength, that they’re blind to everything else around them.

Even the things that might actually, genuinely make them happy.