White House Doing a “We the Geeks” Google Hangout Tomorrow

Despite Obama being the one to get hard-core nerds all in a tizzy by confusing Star Trek and Star Wars last March. 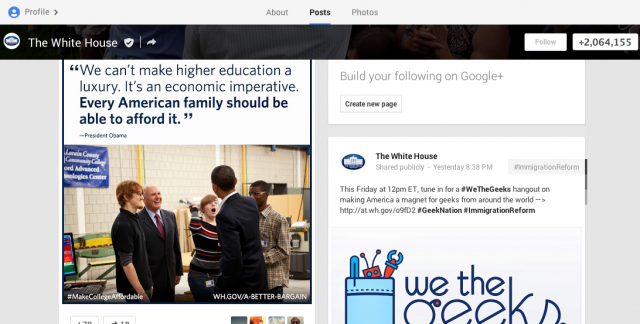 With politicians making noise over American graduates moving to other countries, the White House is using this issue as a jumping off point for comprehensive immigration reform and aiming to attract “geeks” from around the world to immigrate here. Thus they are hosting a Google+ Hangout on “Making the U.S. a Geek Magnet” tomorrow at noon EDT.

The White Houses promises that the Hangout will be pretty great. According to their blog (and aren’t we all impressed that they’re so down with our youth culture of blogs and hangouts and geeks?):

You can meet extraordinary immigrant pioneers with backgrounds in science, technology, engineering, and math (STEM), who have made amazing discoveries, developed new inventions, founded high-growth companies, and conducted remarkable research. The [participants] will share their personal stories and perspectives on why paving the way for future foreign-born innovators is essential to keeping America globally competitive and keeping the Nation’s science and technology enterprise on the cutting-edge.

Participants will include Anousheh Ansari, one of the first self-funded space tourists, Steve Chen, co-founder of YouTube, Ping Fu, winner of the greatest-name-ever-award and chief strategy officer of 3D Systems, Mario Molino, who won the Nobel Prize for Chemistry and the Medal of Freedom, and Jan Vilcek, winner of the National Medal of Technology and Innovation and creator of the Vilcek Prize. It will be moderated by Todd Park and Doug Rand.

I have also decided that I should really enter a field where there are more prizes to win, because anyone’s name sounds cooler when you add “winner of the freaking Medal of Freedom” after it. So tune in tomorrow at noon (we’ll have the live stream for you) for discussions of geekitude and immigration reform, two topics that should really always go hand-in-hand.

(via The White House, image via Google+)