Universal Studios’ Jaws Ride Closes Down, but You Can Experience It With This Simulated YouTube Tour 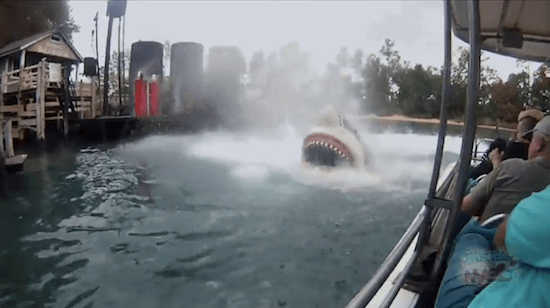 Universal Studios’ Jaws ride may be closed and gone forever, but a well-shot, simulated tour of the entire experience — including the walk through the midway leading up to the ride — forever lives on thanks to InsideTheMagic’s YouTube account. The video tour, and nostalgia, below.

Though Universal Studios now forever lives in the shadow of its more exciting counterpart, Islands of Adventure, Jaws was one of the few “extreme” rides Universal Studios has to offer. It didn’t provide any kind of drops or mind-numbing speed, but once the ride got going, complete with explosions and water spraying everywhere, it was always felt more fun than, oh, I don’t know, a slow tour through tiny, animatronic, ethnic children singing about togetherness, for example.

As a Floridian who either went to Orlando roughly a million times a year as a child, or lived half an hour away from Disney and Universal for a little over four years, I can say that theme parks removing your favorite rides and foods, and destroying your childhood, is a fairly regularly occurrence. Universal doesn’t do it as much as Disney, but Universal also isn’t nearly as big or popular. Even though I have lived a life of Disney removing everything that is great (even over a decade later, Mr. Toad’s Wild Ride is still sorely missed) and should be used to this kind of thing by now, seeing Jaws go is somewhat of a surprise, especially considering the whole area surrounding the ride was in theme.

Where can simulated adventure seekers experience the thrills of being harassed by a humongous shark now? The above YouTube video, and one week a year on Discovery Channel, I guess