This will be about as effective as Walmart's video game ad ban. 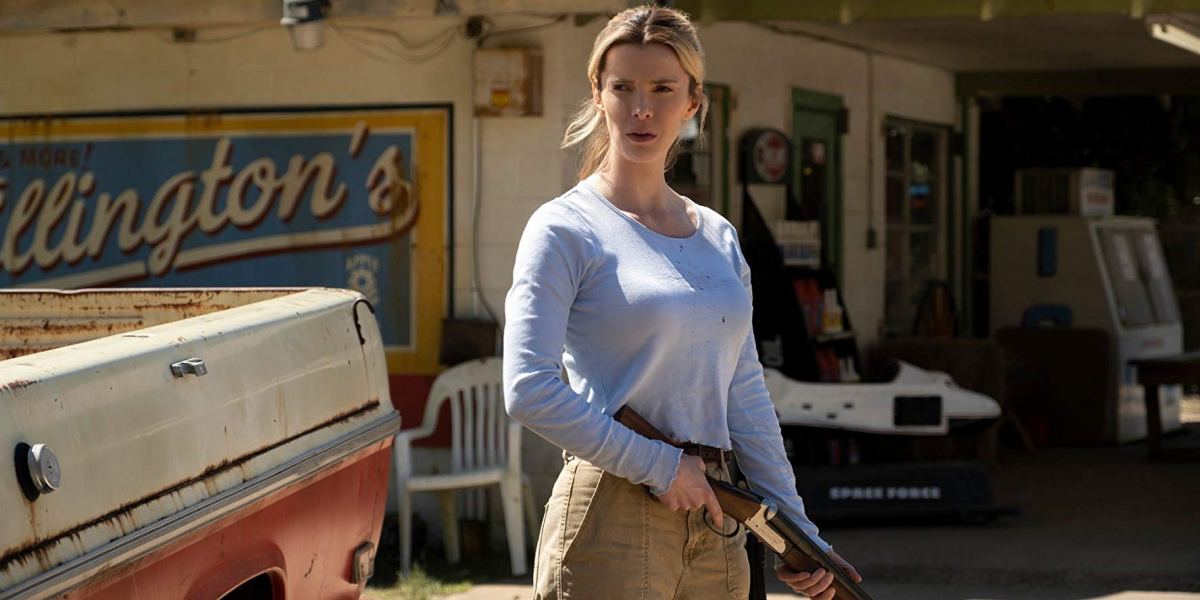 Universal has canceled their upcoming horror satire film The Hunt ahead of its September 27th release date. The Blumhouse film, which stars Betty Gilpin (GLOW), Hilary Swank, and Ike Barinholtz (The Mindy Project), was an updated take on Richard Connell’s 1924 short story “The Most Dangerous Game”, where wealthy people hunt others for sport.

The studio released a statement saying, “While Universal Pictures had already paused the marketing campaign for The Hunt, after thoughtful consideration, the studio has decided to cancel our plans to release the film … We stand by our filmmakers and will continue to distribute films in partnership with bold and visionary creators, like those associated with this satirical social thriller, but we understand that now is not the right time to release this film.”

The synopsis for the film read: “In the shadow of a dark internet conspiracy theory, a bunch of elites gathers for the very first time at a remote Manor House to hunt humans for sport. But the elites’ master plan is about to be derailed because one of the hunted, Crystal (Betty Gilpin), knows The Hunters’ game better than they do. She turns the tables on the killers, picking them off, one by one, as she makes her way toward the mysterious woman (two-time Oscar® winner Hilary Swank) at the center of it all.”

Marketing for the film was halted after last weekend’s spate of mass shootings, but the studio experience more pressure after a Twitter outburst from Donald Trump. Trump didn’t name the film, but tweeted the following:

….to inflame and cause chaos. They create their own violence, and then try to blame others. They are the true Racists, and are very bad for our Country!

The President’s tweets were likely inspired (as most of his tweets are) by negative coverage of the film on Fox and Friends. In the wake of the mass shootings, FOX News (like other right wing pundits) has pointed the finger at violent video games and films to avoid discussing the real issue, gun control.

Upon discovering that the film features a group of wealthy elite liberals hunting down kidnapped red state “deplorables” (aka a reverse The Purge), FOX News was quick to criticize the film. Fox Business host Maria Bartiromo said, “I’m just wondering if it’s going to encourage more backlash against conservatives … Is it another call to act? It’s crazy.”

In addition, Fox and Friends First‘ guest (and former Home Improvement star) Zachery Ty Bryan said, “At the end of the day, [the elites] look at us as deplorables … They look at us as racists and bigoted evil people. When you can dehumanize a side or a group that supports Trump in this case…you can do anything, so why not hunt them like you would animals?”

It’s one thing to pull the film out of respect for the victims of the shootings. But Universal seems to be kowtowing to faux outrage from the right wing media and Trump. First off, if you don’t want to be seen as racist deplorables, the solution is simple: STOP BEING RACIST. Secondly, these arguments against the film are nothing more than bad faith talking points designed to distract from the real injustice: the government’s complete unwillingness to legislate any form of gun control.

Universal’s move will do nothing to curb gun violence, and falls in the same category of useless pandering as Walmart’s ban on ads for violent video games instead of, I don’t know, banning gun and ammunition sales.

And let’s not forget, these mass shooters are not liberal elites hunting down deplorables: they are right wing, racist monsters emboldened and radicalized by Trump and the right’s violent and divisive rhetoric. Those are simply the facts.

Hilary Swank, who is currently at the Locarno Film Festival, refused to discuss the film, saying only “No one’s seen the film. You can’t really have a conversation about it without understanding what it’s about.”

Many took to social media to call out the absurdity of the situation:

it says a lot of about our politicians that art scares them more than guns. #TheHunt

you can have my satirical film about gun violence when you pull it from my cold dead fingers. #TheHunt

It’s stupid that #TheHunt has been canceled. We can blame video games and films but won’t blame our gun laws? pic.twitter.com/XqOLqXKuen

Reasonably sure Universal made the right decision to shelve THE HUNT.

Deeply disturbed that that decision came so soon after a deranged tweet from the President calling the movie racist.

So just so we our clear, our simple head of state misread the right wing politics of an upcoming film as left wing, which led to its release being cancelled. The takeaway here obviously is that this left wing political correctness is getting out of control https://t.co/2SLjjYNfzn

So glad that the President is responding to gun violence by taking swift action on *checks notes* … um, a movie. https://t.co/s6jJ1HprRn

Well we canceled THE HUNT and Walmart got rid of their video game signage so I guess that’s that for mass shootings in America pic.twitter.com/3Hsv11T5N8