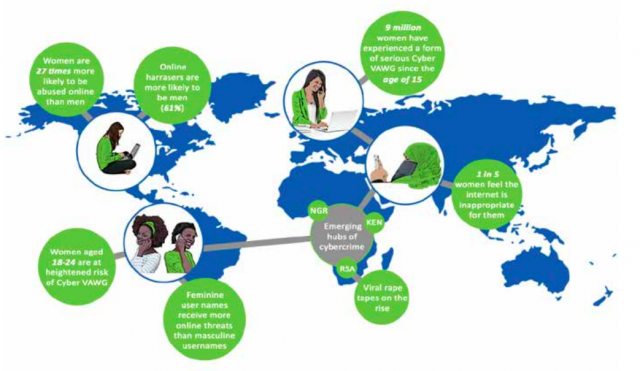 The UN released a lengthy report today about the types of online harassment and cyber crimes that are perpetrated primarily against women and girls, then hosted an event at which several speakers discussed the state of gendered violence online; Zoe Quinn and Anita Sarkeesian spoke at that meeting today, and their names also appear in the report, alongside the names of several other women who’ve had similar experiences.

The UN report includes a wealth of statistics about online abuse and harassment. If you’re looking for a source to use in order to debate a nay-sayer claiming that “everyone” receives an equal amount of harassment online and/or that women and girls are just “overreacting,” this research paper will include the statistics you need to make your case. The report also makes the valuable point that cyber abuse is hardly a “first world problem,” given that internet access and mobile access have become increasingly available worldwide. The internet is an undeniable part of people’s careers and lives across the world. Guaranteeing safety and privacy to users should be paramount, but this is a problem that requires many inter-locking solutions, which the report acknowledges.

I didn’t have the chance to read the report as thoroughly as I’d like, but from what I did read so far, it’s definitely worth your time, for the sheer volume of data alone. There are certainly people out there who already believe that the internet is just fine as it is, and extremists may not be convinced by even the most comprehensive research. Still, though, this volume of data may lend credence to the depth of this problem for folks who are still “on the fence” about whether or not cyber violence predominantly happens to women and girls.

Furthermore, I often see people downplay the effects that online harassment can have on its victims’ mental health. In general, I think people believe that if something doesn’t happen “in person,” then it can’t cause much harm, but that’s just not the case. It’s important for us to take cyber-stalking seriously, given that it can be used as a tool to make people miserable — just as effectively as “real life” stalking. The internet is “real life,” too, and that’s why it’s so important for us to litigate abuse and crimes that happen online, rather than to ignore those who suffer its effects.

(via The Daily Fandom, image via UN Women)