Unicef's Mr.Poo Mascot Dances, Sings For A Good Cause | The Mary Sue

Unicef’s Newet Mascot, Mr.Poo, Dances And Sings For A Good Cause 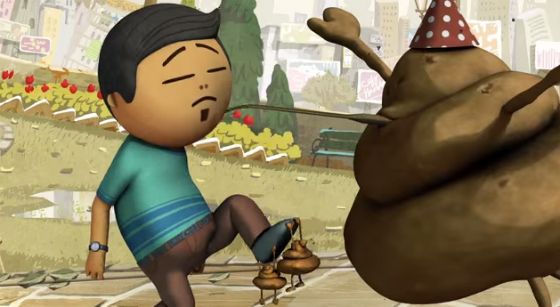 Public defecation in India has a serious effect on health and hygiene. Now UNICEF is saying “Enough of this shit” in a very silly way, using a personified dollop of poo with its own music video to encourage people to take their “Poo2Loo”, i.e., drop their kids off in the pool rather than leaving them out on the street to choreograph dance numbers.

The Poo Party video is just one part of Unicef’s campaign to make bathrooms number 1 for number 2 or, as the Poo2Loo website says, “Give the squat a push.” Unicef has also developed a “Toilet Trek” video game that simulates the struggles experienced by people without access to a safe or clean toilet.

The game requires players to collect toilet paper rolls and flush away Mr.Poo’s fecal army, and also acts as a sobering reminder that even at my least dignified (bathroom time) I still can’t fully comprehend how privileged we are in this country.  As the game website reminds visitors, 2.5 billion people don’t have access to a safe or hygienic toilet, resulting in deadly but preventable diarrhea and intestinal worms. Many of the facts shared during the game are so upsetting that I wish Unicef had offered some way to make a difference or donate there on the website, maybe something similar to the Tap Project.

Thankfully anyone disheartened by Toilet Trek isn’t totally shit out of luck–the cavorting Mr.Poo appears to be making a tangible change to how citizens of India are able to dispose of their waste, with over 1,14,351 people to date pledging to take the Poo2Loo. Hopefully the personified turd won’t be needed for Pooblic Service Announcements soon and can just devote himself full time to making music videos, because that shit was catchy.