I guess He's Just Not That Into Poo was taken. 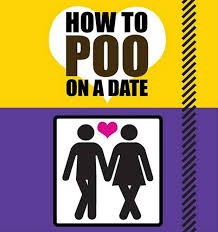 Matt and Enzo’s comprehensive guide to the romance of defecation may be all about number two, but as far as awards go the pair is number one: How To Poo On A Date was recently awarded the 36th Annual Diagram Prize, proving definitively that they’re the shit.

The Diagram Prize is awarded every year to the book with the oddest title, and though it doesn’t come with a monetary reward, it does bring the authors publicity (you’re welcome, Matt and Enzo.) This year’s winner narrowly beat out Are Trout South African? and The Origin of The Feces.

Other titles that narrowly missed winning the annual honor? How To Pray When You’re Pissed At God, Working Class Cats: The Bodega Cats of New York City, and Pie-ography: Where Pie Meets Biography.

The public have chosen wisely. Not only have they picked a title that truly captures the spirit of the prize, they have selected a manual that can help one through life’s more challenging and delicate moments.

Here’s my selection of the most striking and hilarious Diagram Prize winners from the last 36 years:

I still wouldn’t recommend judging a book by its cover, but obviously the Diagram Prize is content to judge a book based solely on its title. Congratulations, How To Poo On A Date. May you prevent people the world over from flushing their romantic chances down the toilet.

(via Neatorama and The Bookseller)