There’s Some Very Unexpected Footage Buried in a New Promo for Star Wars: The Last Jedi

As big movies draw close to release, the near-endless barrage of promotional footage can all start to blend together, especially since most of it tends to be recuts of stuff we’ve already seen with mostly tiny, unimportant new bits thrown in to keep us searching for more. But you’re going to want to pay attention to this one.

The final scene in the above trailer is not a spoiler, as far as we know—and good luck avoiding it for the next week if you want to go into The Last Jedi knowing as little as possible—but it is an incredibly surprising moment that has us dying for context. So, it’s incredibly effective marketing, basically.

But is it more than that? Probably not, or at least that’s the side I’ve personally landed on, but some new comments by Director Rian Johnson make things a little more interesting—or he’s pulling some Jedi-level mind tricks.

The shot in question is the one in which Rey uses the skills she displayed in the last movie to Force-pull herself another much-needed lightsaber that we’re used to seeing in someone else’s hands: Kylo Ren’s. 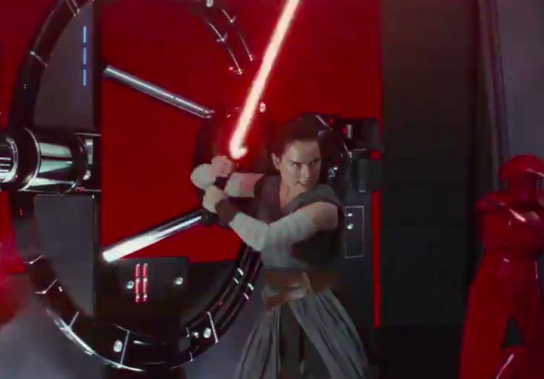 It also comes at the end of Snoke’s “fulfill your destiny” voiceover, again teasing fans about the light/dark side alignment and/or potential team-up of Rey and Kylo Ren, like the first trailer’s scene that had him seemingly extend his hand to her as she struggles to find her “place in all this.” (Though it was pretty obvious that’s not how that footage will line up in the actual movie.)

While Kylo Ren is admittedly a wild card who may very well upend expectations and have some sort of heroic redemption arc, I have trouble buying into any theories that Rey is tempted to the dark side. Still, I can’t help but want to know not only how she found herself in a position to pick up Kylo’s lightsaber (unless she’s now just taunting him with how much better she is at that move than him, which would admittedly be endlessly entertaining), but more than that, I wan’t to know what they are hinting at with this imagery and Snoke’s line, because it seems to be something.

Director Rian Johnson talked about the movie’s marketing in an interview with /Film, and after saying that he’s been very involved in what we’re seeing publicly, he said, “I think the trailers do a very good job even when they’re using manipulation in various ways.” Later, he added,

They never misrepresent the movie. And also the other thing I love about the trailers is they don’t give you answers, they just give you questions. Which I think is really exciting. So yeah, I’ve been really thrilled with the trailers the guys have been doing for it.

Dancing around a semantic difference between manipulation and misrepresentation seems a bit manipulative in itself, but it’s interesting to think about how these teases would still properly represent the movie, even if the most obvious implications are way off. (I just hope Last Jedi answers more of the questions raised by its marketing than The Force Awakens did.)

What is Rey’s destiny? She seems to be wondering that as much as the rest of us. Maybe taking up Kylo’s lightsaber isn’t symbolic of Rey joining forces with him—or the Sith in general—so much as it’s about her beating him at his own game. I mean, he doesn’t exactly seem like the sharing-is-caring type anyway, and I can’t imagine him being happy with someone else playing with his toys.

Or, maybe it’s a meaningless tease in one of “the TV spots I haven’t been paying attention to or something,” as Johnson also mentioned, and I’m thinking about it way too hard.

But something about the way he told /Film “this’ll be easier to talk about after the movie comes out, the trailers never misrepresent the movie,” makes me think that, whatever’s going on in the trailers, it’s not anything people have been guessing, but we’ll walk out of the theater thinking how it still all makes sense together. It seems like what the trailers have shown is the dilemmas Rey will face, and not necessarily an indication of how she’ll ultimately deal with them.