Une Bobine Is A Posable Sync Cord And Stand For iPhone 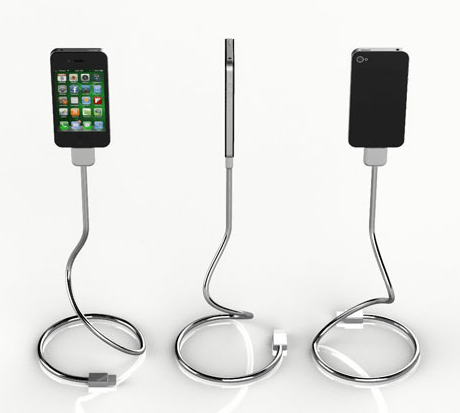 When I first got a smartphone, I was blown away by the awesome functionality it can have as a second screen when you’re at your computer. You can use it for Twitter, or a dedicated clock or calender, you can even use it to half-watch videos or TV while doing something else. The problem is, you need some way to prop it up so you can see it conveniently and have it charging at the same time. The upcoming Une Bobine combination cable and stand looks like it’ll do a great job, and give you a lot of flexibility in the meantime.

Une Bobine (French for “a coil”) is a flexible metal cable that’s strong enough to hold your iPhone but  flexible enough to be positioned in any way you see fit, whether that’s at eye level to your computer screen, just barely visible at the corner of your eye, or facing your coworkers desk as it plays video of a birthing cockroach on repeat. And like a normal cord, it plugs into USB ports and charges your phone.

Since it has already reached its funding goal, Une Bobine doesn’t need your money to get made. You can, however, shell out some cash if you’d like to buy one now, as opposed to later. The stand — complete with free shipping internationally — is a mere $25, almost unbelievably cheap for something that could be so useful. Unfortunately, I have an Android phone, so if you’ll excuse me, I have to try and figure how to, like, glue it to the side of my computer screen or something.