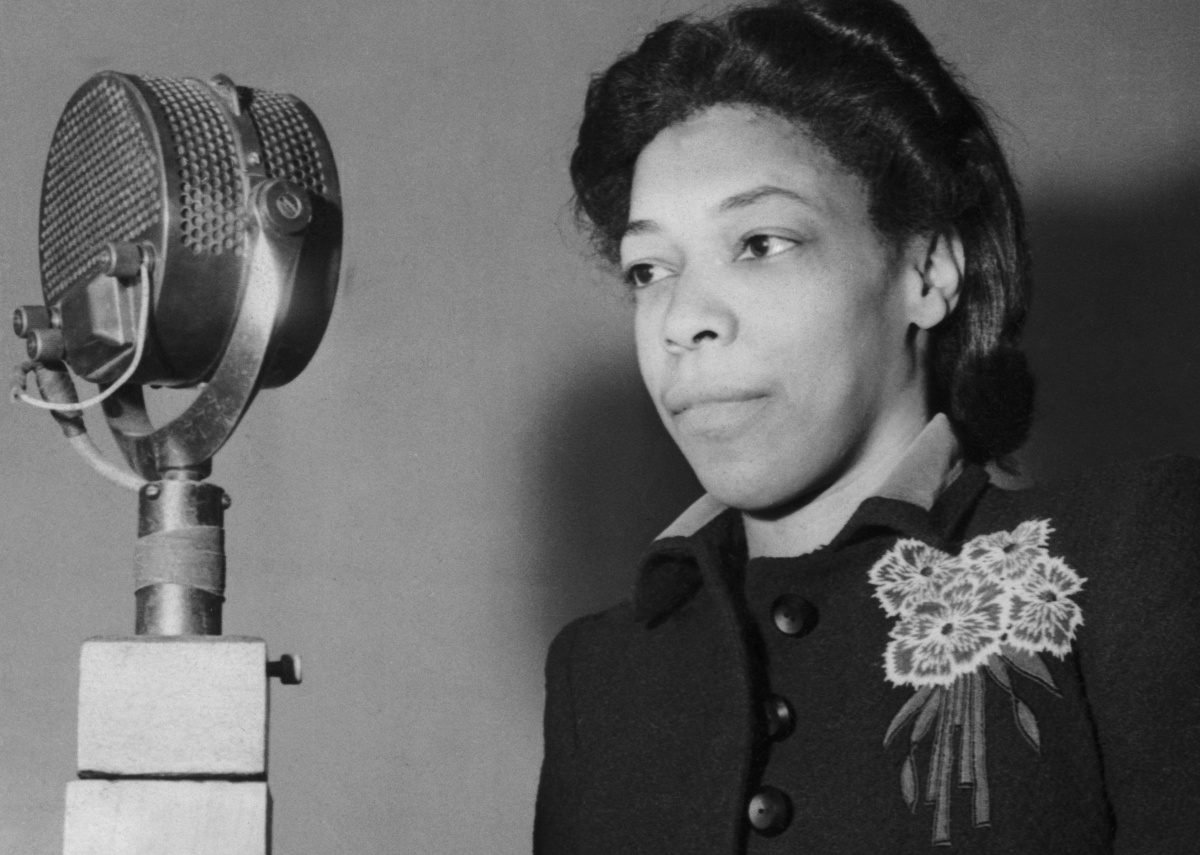 ‘Girlfriend of the forces’ Una Marson (1905 -1965) broadcasting to British troops in the West Indies from a theatre in London, 23rd February 1942. A political activist, poet and playwright, she was also the first black woman programme maker at the BBC.

Una Marson was born 6 February 1905, in Santa Cruz, Jamaica as the youngest of six children. Una grew up in a comfortable, middle-class household.

At the age of 10, her father died, leaving the family with huge financial problems, so the family moved to Kingston. Una finished school at Hampton High but did not go on to a college education. Instead, she found work as a volunteer social worker and used the secretarial skills she had learned in school.

In 1926, she was appointed as the assistant editor of the Jamaican political journal Jamaica Critic and in 1928, she became Jamaica’s first female editor and publisher of her own magazine, The Cosmopolitan. The Cosmopolitan featured articles on feminist topics, local social issues, and workers’ rights. It was aimed at a young, middle-class Jamaican audience, and it encouraged women to join the workforce and become politically active. The magazine also featured Jamaican poetry and literature from the Jamaican Poetry League.

In 1930, Marson published her first collection of poems, Tropic Reveries, that dealt with love and nature with elements of feminism. Many critics were confused by Marson’s love poetry, because there is no evidence of her having any romantic relationship in her lifetime, even though love continued to be a common topic in her work. I personally think that Marson was asexual, and it’s also not surprising that an asexual person would write about love. You can be asexual and/or aromantic, while still understanding love.

The Cosmopolitan discontinued publication in 1931, due to financial challenges, so Marson decided to focus on her poetry and plays. In 1931, she published another collection of poetry, entitled Heights and Depths, and also her first play, At What a Price. At What a Price is about a Jamaican girl who moves from the country into Kingston to work as a stenographer and falls in love with her white male boss. Classic romantic-comedy/tragic romance hook.

The play opened in Jamaica and later London to critical acclaim. In 1932, she decided to move to London to find a wider audience for her work and to experience life beyond Jamaica.

From 1932 to 1945, Marson lived between London and Jamaica. According to her the racism and sexism she met there “transformed both her life and her poetry.” Due to the the persecution she faced, her “voice” in poetry became more focused on black female British identity.

Marson returned to Jamaica in 1936, with the goal of promoting national literature by helping to create the Kingston Readers and Writers Club and the Kingston Drama Club. She also founded the Jamaica Save the Children Fund, an organization that raised funds to give poorer children money for basic education.

Marson began publishing Jamaican poetry in a collection called Moth and the Star in 1937. Many of the poems deal with how black women, despite the media’s portrayal of them as less beautiful when compared to the whites, should still be confident in their own physical beauty. Marson herself, her biographer tells us, within months of her arrival in Britain “stopped straightening her hair and went natural.”

In 1941, she was hired by the BBC Empire Service to work on the program Calling the West Indies, in which World War II soldiers would have their messages read on the radio to their families. She would become the producer of the program in the following year.

Caribbean Voices, afterward produced by Henry Swanzy, was described by Kamau Brathwaite as “the single most important literary catalyst for Caribbean creative writing in English.”

Little detail is known about Marson’s life post-WWII. We know she published a poetry collection entitled Towards the Stars and one article entitled “We Want Books – But Do We Encourage Our Writers?” in an attempt to drive Caribbean nationalism into literature. We do know that she died in her native Jamaica in 1965, following a heart attack at age 60.

Despite the gaps in her legacy, there is no doubt that both her own work and her creation of Caribbean Voices were important in bringing Caribbean literature to the international public, as well as spurring nationalism within the Caribbean islands that she represented.