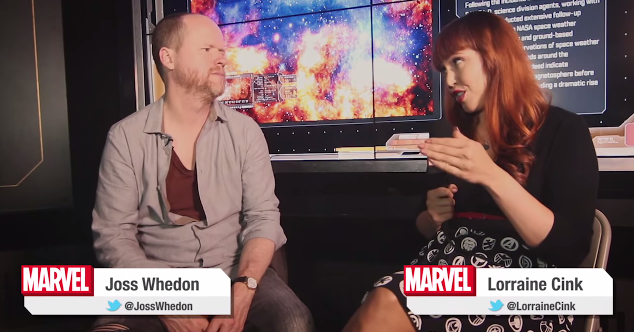 Joss Whedon’s talked before about about the massive hero soup he had to manage with Age Of Ultron, and now we’ve got confirmation that he’s not just talking about the (many) new characters we’ve been seeing in trailers and promo art. There’s definitely more than Ultron, Vision, Scarlet Witch, Quicksilver, that lady, and this lady that we’ve got coming our way May 1.

The addition of even more characters has been rumored for a long while — Badass Digest suggested back in August that the end of Age Of Ultron would involve the introduction of a new lineup beyond Scarlet Witch and Quicksilver’s additions. From their write-up back then:

At the end of Age of Ultron Cap will assemble a team that is a mix of familiar and new faces, leading forward into Phase Three. It’s an exciting mission statement for Marvel Studios, letting audiences know that the Avengers team is more than just the guys who were in the first film. The make-up of that team is, technically, up in the air until that scene is shot (I suspect it’s being saved for either scheduled reshoots or will be snuck into the schedule of Captain America 3, which goes before cameras early next year), but Joss Whedon’s script did indicate who would be on that team. I won’t reveal all the names – and some have changed in between drafts, by the way – but one character who has always been in this new team is Captain Marvel.

Ever since James Gunn revealed that Guardians Of the Galaxy 2 would introduce another superhero and hinted that that hero might be a lady I’ve been assuming that hero would be Captain Marvel. But I’ve always known where I’ve wanted her to show up, and that’s right there in Age OF Ultron — in part because my brain still refuses to wait until 2017 or 2018 and in part because I so much adore the idea of being in that theater watching Ultron for the first time only to see Carol Danvers pop up.

And now Whedon has confirmed — in an interview with Marvel.com, so you know for double-certain it was on Marvel’s terms — that not every new character’s been revealed.

I’m not completely convinced Carol will wind up being among the new faces we’ll meet in Ultron, but regardless I am very excited to find out who they do turn out to be — and I sincerely hope that this will turn out to be one of the modern cases where it actually is possible to keep the secret until the theatrical release. And I’m assuming they’re not just talking about, say, Falcon or Peggy, and because that would be way more boring because we already knew about their inclusion — but it could be. (ETA: Black Panther? So they don’t have to intro him in the already-packed Civil War and can just dive right in?)

Who do you think we’ll be seeing in Ultron?