Did Eisenhower and Churchill Order a Cover-Up of a UFO Encounter? 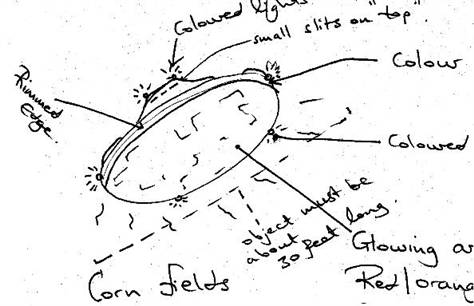 Britain’s National Archives have published hundreds of previously classified UFO-related documents, setting conspiracy theorists abuzz. Among them are witness reports, sketches, and briefing notes over the past 50 years; perhaps the most intriguing find is a 1999 letter alleging that during World War II, then-Prime Minister Winston Churchill ordered a cover-up of an encounter between an unidentified flying object and a RAF bomber.

Among the latest of released files (pdf, pp. 205-209, 273-277) related to mysterious sightings, one letter from an unnamed individual claims that his grandfather was present at a wartime meeting between US President Dwight Eisenhower and Churchill. During this secret encounter, Churchill allegedly “made a declaration to the effect of the following”:

“This event should be immediately classified since it would create mass panic amongst the general population and destroy one’s belief in the Church.”

Before you get all riled up, there’s neither proof this event ever actually took place, nor proof that alien life actually exists, since the meeting was after all, only over a reported sighting.

A response from the Ministry of Defense points out that any documents prior to 1967 not already published are likely to have been destroyed, due to a lack of public interest in UFO sightings. They also noted that though they “[did] not have any expertise or role in respect of ‘UFO/flying saucer’ matters or to the question of the existence or otherwise of extraterrestrial lifeforms,” they “[remained] totally open-minded” to that notion. Ha, their pretend innocence fools no one! It’s common knowledge that governments and aliens have been pallin’ around since time immemorial.