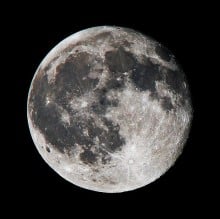 The moon has watched over the Earth for all human history, inspiring poems, paintings, and songs. We’ve mapped its surface, and even went there several times. With all that information, one would assume that we at least know what it looks like.

That seems to not be the case for at least one gentleman who called the Herts Police to report strange lights hovering over his house. After describing the mysterious, silent lights the man remarked several times that he didn’t, “know what the hell it is.” A few minutes later, the man was good enough to call back and inform the police that it was the moon.

Thankfully, the police have released a recording of the call on YouTube. You simply must listen.