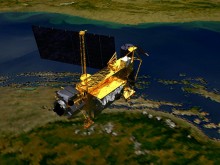 In their ongoing effort to keep the public informed about the 6.5 ton spacecraft falling to Earth today, NASA announced via their Twitter stream that the Upper Atmosphere Research Satellite (UARS) probably won’t be touching down in North America. Earlier today it was reported that the spacecraft would miss North America entirely, though NASA is now saying that a change in orientation and unexpected deceleration means that it’s still a possibility, albeit a slim one.

Where the spacecraft will touch down is still an open question, though NASA is tracking the vehicle and providing frequent updates. In a series of recent tweets, the space agency dispelled some of the concerns about the falling satellite. First off, they reiterated that the odds of being struck by a piece of debris are one in several trillion. Second, NASA stated that any debris that lands is unlikely to be on fire, as objects entering the atmosphere generally stop heating 20 miles up and cool for the rest of their fall. In fact, by the time debris reaches the ground, they could be moving as slow as 30 mph. NASA also asks that if you do find a chunk of space debris that you leave it be, and contact local authorities.

With those reassurances and useful science factoids now in place, we can all sit back and wait for the UARS to make its spectacular return to Earth — expected late tonight or early tomorrow.

Updated with new information from NASA at 11:00AM.