NASA is Deorbiting a Satellite, but They Don't Know Exactly Where or When It's Coming Down 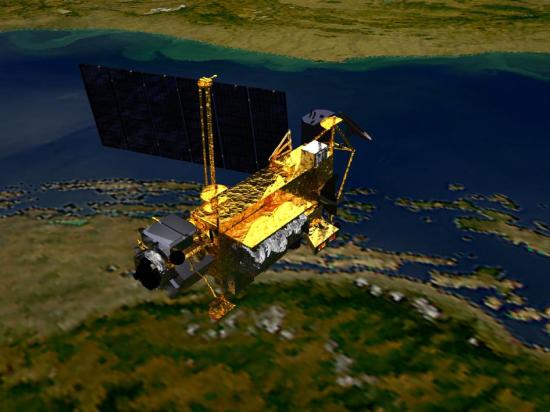 NASA’s 6.5 ton, 35-foot long Upper Atmosphere Research Satellite (UARS) is beginning the process of making an uncontrolled re-entry through the Earth’s atmosphere. Trouble is, the space agency isn’t sure exactly where or when the satellite is coming down, but they are sure that it won’t all burn up before it hits ground.

Now, to follow up that provocative lede, it’s important to note that NASA does have some very good guesses about what the spacecraft is going to do. They’re best guess is that it should begin re-entry on September 23, give or take a day, probably over the ocean. It’s important to note that no injury has ever been caused by orbital debris under NASA’s half-century watch, but the Universe Today quotes NASA orbital debris scientist Nick Johnson as giving it 1 in 3,200 odds that any one person in the world will get hit by debris. That sounds scary until you remember to multiply that figure by a total world population of 7 billion, pushing the odds safely into the astronomical territory.

As to where the UARS is coming down, the agency is confident that the debris will be centered somewhere between 57º North and 57º South, between Canada and South America. It’s possible that the debris field could be as long as 500 miles, and several components are expected to make it down to ground level. Again, though it’s unlikely any will come down near populated areas and the satellite carried no hazardous materials, NASA is asking people not to handle any debris they might find. If you do find a smoldering chunk of something you think could be space debris, the space agency asks that you contact local law enforcement.

Interestingly, NASA says that these kind of deorbits happen all the time. Last year, there was apparently one object per day re-entering the atmosphere, about 75 metric tons in total. The difference now is that the UARS is fairly large and bulky craft compared to other bits of space debris.While bringing down spacecraft without control sounds scary, the dangers of leaving it in orbit are probably far, far greater.

In 1991, NASA deployed the (UARS) from the Space Shuttle Discovery, which far outlived its expected life span of three years and continued to send back data until it was decommissioned in 2005. In it’s time, the UARS provided valuable scientific information about the chemical composition of the upper atmosphere and helped answer some nagging questions about the hole in the ozone layer (remember that?). The UARS was, apparently, always intended to end its life in such a fiery manner, with no plans to ever bring it back to Earth via the Space Shuttle.

Interestingly, NASA seems unconcerned about any potential for damage or injury from the incoming spacecraft. In fact, their comments made it sound like their biggest concern was that they weren’t sure where tell people where to look  in order to get a view of the speeding satellite streaking through the sky. That’s certainly reassuring, to say the least. For anyone concerned about the crashing UARS, or simply just curious, NASA has set up a website to keep the public updated.