NASA's Free-Falling UARS is Down! 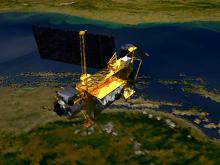 After days of waiting, NASA’s Upper Atmosphere Research Satellite has finally plummeted back to Earth. Initially it seemed that the craft would complete its re-entry sometime on Friday, but new information indicated that the craft had re-orientated itself and begun to slow down. Early this morning, the space agency announced via their Twitter feed that the satellite had come down 11:23 PM and 1:09 AM today.

As with the time of re-entry, the exact location of the crash site is unknown. However, NASA believes that the craft touched down somewhere in the Pacific Ocean. That is, however, a pretty big target.

One of the biggest questions of this entire event has been where debris from the satellite may have fallen, if any came down at all. There are no reports of any space-junk finds this morning but NASA says in the unlikely event some survived the fall, it would have come down over Canada. Any Canadians in the audience with some smoldering metal debris they can’t explain?