Tyler, The Creator’s The Jellies Stars an Awesome Black Lead, Even If He Is a “[email protected]#ing Goober”

“How many fucking black cartoon characters are on TV?”@tylerthecreator was asked why Cornell Jelly was a black character––his answer was 🔥 pic.twitter.com/GtClBPiqoW

[8/30: CORRECTION – the role of Cornell Jelly will be voiced by actor, voice-over artist, and geek culture treasure Phil LaMarr, not Tyler, The Creator. The article below has been edited to reflect this.]

“How many fucking black cartoon characters are on TV right now? Name five—I’ll give you time.” At San Diego Comic Con, when Tyler, The Creator was asked why the protagonist of his upcoming Adult Swim cartoon, The Jellies, was now black after having originally been white, this was his incisive response.

A fan asked the question, because The Jellies is getting new life on Cartoon Network after having already existed on Tyler, The Creator’s content app, Golf Media, which debuted about two years ago. The Jellies tells the story of “a family of jellyfish and their 16 year-old son Cornell. When Cornell Jelly learns he was adopted at birth, he is shocked, and subsequently spirals out of control in an attempt to ‘find himself.'”

In the revamped version that is coming to Cartoon Network, Cornell now looks like this: 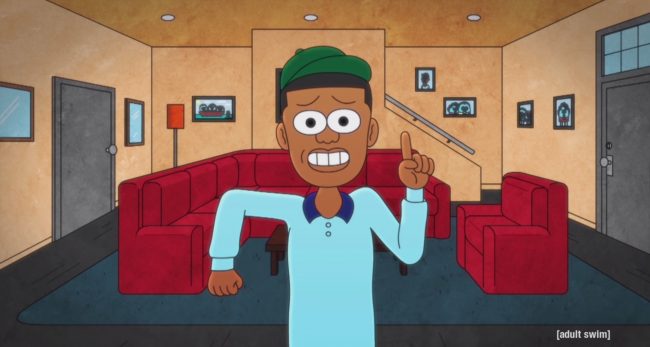 Tyler told the fan that Cornell is black now, because there are no animated black protagonists on TV right now, and we need them! What’s more, we need diverse black protagonists, not one-note stereotypes. As Tyler says in the video above, Cornell is a black lead who “ain’t got no guns, he ain’t shoot no fucking basketball, and he a fucking goober—and we gonna put him on TV.”

To me, the question isn’t about why he’s black now. The better question is: why was he white in the first place?

Tyler already had a relationship with Cartoon Network, after having created the sketch comedy show, Loiter Squad, with fellow Odd Future member Lionel Boyce (A.K.A. L-Boy). Still, it’s telling that the network decided to pick up this cartoon with a white protagonist first, only to have the character’s race change later.

I wonder if the same would’ve happened if Cornell were black to begin with? Or would The Jellies then have been seen as a “black cartoon” with no universal appeal? Was the decision to start the character as white a calculated one to get the show made with the knowledge that this change could be made?

It’s important for Cartoon Network, as well as the rest of us, to see how easy it is to have representation. Too often, decision-makers in entertainment (the majority of whom are white) are scared by what they don’t understand. They think that including characters of color requires all this extra work that they don’t know how to do. As if it’s this complicated process as opposed to just writing more different people.

Tyler is basically saying: OK, you remember that white dude you liked? He’s exactly the same. Except he’s black now. But he’s the same dude. Because, believe it or not, black dudes can act like this. Obviously, with actor Phil LaMarr doing the voice of Cornell, the performance will change, but the core of the character remains the same, and he’s as much of a “goober” as he was before!

The move to Cartoon Network provides a thrilling opportunity for media representation in animation, and I’m looking forward to checking it out when it drops later this summer.