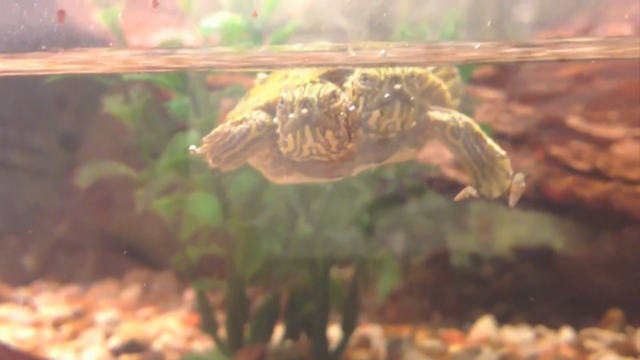 On June 18th, the world’s cutest little abomination was born at the San Antonio Zoo— a female Texas cooter turtle with two heads. The zookeepers took advantage of the situation and gave the turtle the most novel name possible, Thelma and Louise. According to one of the zookeepers, the heads each have their own personality. One is very curious, the other very aggressive.

What’s more amazing than it simply existing is that the experts at the zoo say it has no health problems. Most of the animals with multiple heads you see in Ripley’s Believe it or Not and the like don’t last very long before going to the big park in the sky, but Thelma and Louise walk and swim around just like any regular one-headed turtle. Thelma and Louise is (are? I have no clue how pronouns work with two-headed reptiles) currently on display at the San Antonio Zoo, so if you’re in the area you can go look at this marvel of nature now.

I feel like this would be a really good Masters of the Universe villain for some reason. And Michael Bay could always use Thelma and Louise as a mascot/publicity stunt for his upcoming Teenage Mutant Ninja Turtles movie. And, of course, the turtle could star in a reboot of Thelma and Louise, which I’m sure would make for an infinitely more interesting film than the original.

(via The Weather Channel)