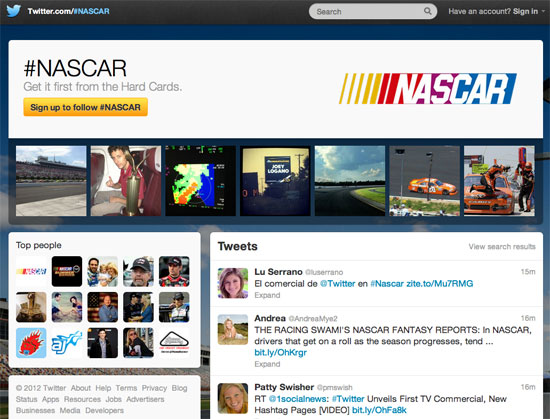 Twitter, everyone’s favorite medium for blasting short-form messages into the void, launched its first TV ad campaign this past weekend. For the company, this is a big moment, cementing Twitter’s relevance as a social network and kicking off a new chapter in the company’s history. So, where does NASCAR come in?

First announced last Thursday by Twitter’s head of the Sports & Entertainment Team Omid Ashtari, the company ran ads for a new kind of hashtag system. Hashtags — things like #belieber, #comiccon, and #wigsex — apparently trace their roots on Twitter back to 2007 and one Chris Messina as their inventor. For years, they’ve been a way for users to have a global conversation. Companies and ad campaigns have also made use of hashtags for some time now, but the new system will feature curated pages of relevant tweets surrounding a hashtag.

The new hashtag system, along with the #NASCAR tag page, was the center of Twitter’s first-ever TV spot. One of the seven new ads is below.

Ashtari explains on Twitter’s blog, in reference to the Pocono 400 race this past weekend:

You’ll also discover the #NASCAR page when you search or click #NASCAR on twitter.com or mobile.twitter.com.

Throughout the weekend – but especially during the race – a combination of algorithms and curation will surface the most interesting Tweets to bring you closer to all of the action happening around the track, from the garage to the victory lane.

Normally, hashtags connect to search pages within Twitter. Their content is not “curated,” but is instead the raw results of a Twitter search. The new hashtag pages appear to be a bit more tailored and nuanced than that, presenting more relevant information built from a core group of Twitter users — in this case, NASCAR people — in addition to everyday users like you or me.

Over at TechCrunch, Ryan Lawler hits the nail on the head as to why this was a good move for Twitter. It all comes down to drawing in more potential users and advertisers:

That’s what’s so brilliant about #NASCAR and what we can only assume will be future hashtag landing pages: The brands themselves don’t have to actually create anything new. Without actually knowing what happens on the back end of a hashtag page, it seems clear that Twitter has built a pretty slick way to curate and repurpose content that is being tweeted out by its users.

Unlike AOL Keywords — and today’s rough equivalent, Facebook Pages — where the onus is on the brand to create, upload, and promote the most compelling content, Twitter’s managed to get its users to do the hard work for brands.

And this is where NASCAR comes in. It might at first seem a bit of a mismatch to have stock car racing associated with a hip, silicon valley company. However, it makes perfect sense as Twitter appears to be positioning itself as the premiere service for popular events happening live. In fact, they’ve basically said as much in this promotional video from last year. You can bet that Twitter will be shopping this video around to organizations like NASCAR, trying to convince them to spring for special hashtag pages.

Considering that NASCAR has an extremely large and endgaged fanbase who would be interested in getting more live info, the move is smart one. Remember, this is a fanbase that buys special radios so they can hear the driver’s chatter. What’s more, races take hours so Twitter would be assured that their target audience would probably see the ads at some point.

Not all Twitter hashtags will have these special pages associated with them. At some point, interested brands will need to work with Twitter to get more than just a search page. One assumes that money will change hands. However, the new system is far from perfect. One would expect that the new, branded hashtag pages would do a better job of screening out unimportant chatter. However, a cursory glance over the special #NASCAR page shows mostly tweets about Twitter’s new commercial.

Looks like it’s a victim of its own success.

(The Next Web, TechCrunch via Techmeme)