Dutch Teenager Arrested For Twitter Threat, So Here Are Some Lessons We Can Take Away From This

At the very LEAST, you need to be subtweeting that sort of thing. 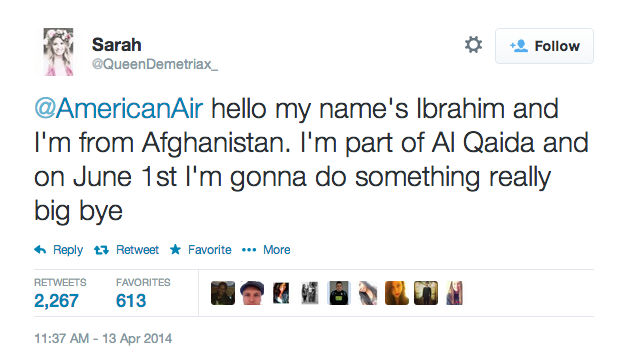 Hey, you know what’s a bad idea? Sending terror threats to an airline over Twitter. But one teenager decided to do it anyway, and now she’s been arrested. Here’s what you can do as a Twitter user to not suffer the same fate as her. 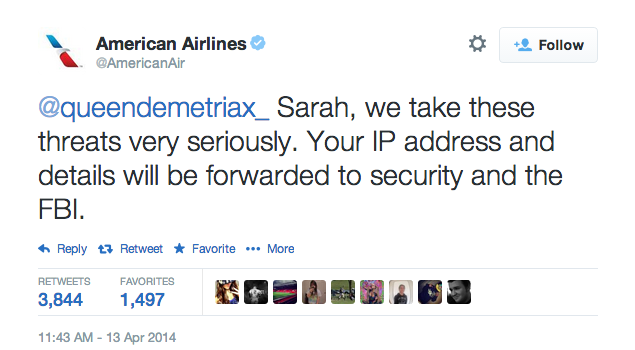 After gaining tens of thousands of followers and issuing several follow-up tweets with such wonderfully nuanced pleas for mercy as “I was joking and it was my friend not me, take her IP address not mine” and “I’m just a fangirl pls I don’t have evil thoughts and plus I’m a white girl,” the girl was reportedly detained by Rotterdam police in the Netherlands.

Both Sarah and American Airlines has deleted all traces of the exchange between them, but the Internet is obviously forever, so the tweets live on in screen-cap form. Which is good, because we’d like to take a look at what you can learn from Sarah’s unfortunate tale:

1. Don’t threaten people. You know, because at worst it’s a terrible thing to do to another person and at best, it’s an incredibly bad joke that never plays well. You know what are good instead, if you want to make “jokes?” Puns. They can even be mean puns, if you’re worried that the lack of terror threats won’t successfully convey to others that you’re most likely a terrible person with poor impulse control. Maybe you can call someone a “fartnugget.” I don’t know. Just no threats.

2. Especially don’t threaten brands, because unlike your average feminist or whoever’s usually getting death threats on Twitter these days, police and other law enforcement officials actually listen to companies.

3. If you’ve ignored points 1 and 2 and threatened somebody anyway, definitely don’t buy into incredibly racist stereotypes to do it. First off, you are going to hurt people who have to live with that crap every day, such as actual people from Afghanistan who just want to board a plane on time without getting detained. Secondly, you are going to get noticed for it, because if airport security are willing to be so awful with actual Afghanis, then of course they’re going to come down on you for merely pretending.

4. Being a 14-year-old white fangirl and having evil thoughts are not mutually exclusive. Case in point: somebody who didn’t have evil thoughts probably wouldn’t think fake terror threats are funny in the first place.

5. But seriously, don’t threaten people. Who even does that?

Is it still mightily unsettling that a 14-year-old girl who did something fiendishly stupid on Twitter is now facing real-world repercussions? Certainly. Might this sort of thing have a chilling effect across the Internet if it continues? Probably. But if that chilling effect mostly deals with people who would be making really gross and terrible terror threats? I think I’m okay with that.