Twitter has announced an overhaul to its reporting and blocking systems, both in-app and behind-the-scenes.

According to Twitter Support, the new process is “much more mobile-friendly, require[s] less initial information, and, overall, make[s] it simpler to flag Tweets and accounts for review,” particularly for those who just observe abusive behavior but aren’t the direct recipients (finally). The social media giant also promises that improvements on the back-end will improve their reported Tweet review system.

With this new reporting process, once you click “This user is abusive,” you’re given the following options:

Then, you choose whether the abuse is aimed at yourself or someone else. The app then asks about the nature of the abuse:

You’re then given the option to include further information, and the report is sent.

This is far superior to Twitter’s current abuse reporting system, which will only let you report abuse perpetrated at you personally—often meaning you have to spend extra time and energy reading and re-reading horrible tweets. The current reporting system also asks for your full name, e-mail, and location, which is obviously incredibly worrisome for anyone already subject to massive online harassment.

Twitter will also now allow you to see the list of users whom you’ve already blocked, and those users will be unable to access your profile. IP banning would still be more effective in this instance (since any user can simply log out of their Twitter account and view a public Twitter profile), but one step at a time; and they do say they’ll be “adding more controls and features to this page in the coming months.” 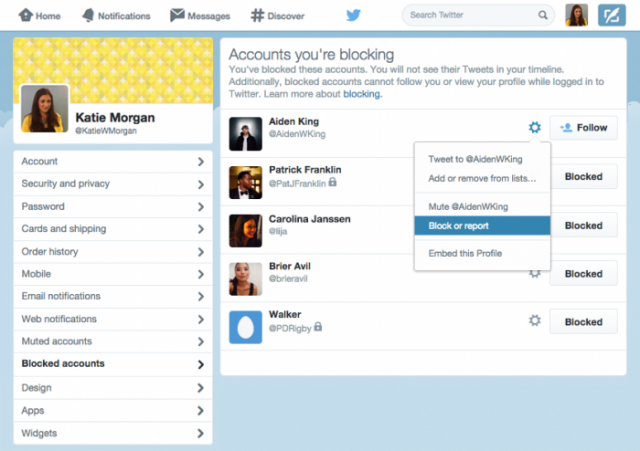 Currently, the changes are only available to a select few (we’re assuming Anita Sarkeesian is on that list), but should be rolled out to the general Twitter public in the next few weeks.

Twitter also says they’ll be adding “additional user controls, further improvements to reporting and new enforcement procedures for abusive accounts” in the coming months. What further changes would you like to see on Twitter?