Does Twitter Work in the Classroom | The Mary Sue

Teachers Bring Twitter Into the Classroom, But Does it Work? 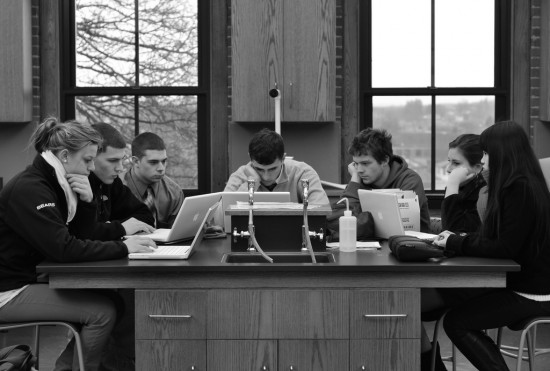 These kids today. Back when I was in school, simply having a cellphone in the school could be enough to land you in hot water. Now, the New York Times is reporting that a growing number of teachers are using Twitter and other digital communication systems as a “back channel” through which students can ask questions and engage in discussions.

Educators who have embraced the new approach say that it brings more people into class discussions. From the NYTimes:

Nicholas Provenzano, an English teacher at Grosse Pointe South High School, outside Detroit, said that in a class of 30, only about 12 usually carried the conversation, but that eight more might pipe up on a backchannel. “Another eight kids entering a discussion is huge,” he noted.

Some students seem to echo this belief. One 17 year old interviewed by the Times said that he never felt the need to speak up during discussions. He adds that when typing, however, he feel like he can better express himself.

Beyond boosting participation, some educators say that modern children respond better to more modern teaching methods. Again, from the Times:

In Exira, Iowa, Kate Weber uses the technology for short periods almost daily with her fourth graders. “You’d think there’s a lot of distraction, but it’s actually the opposite,” she said. “Kids are much quicker at stuff than we are. They can really multitask. They have hypertext minds.”

Bold changes to traditional teaching like this are bound to beg the question: do they work?The discussion about how to incorporate technology into the classroom has been a longstanding one. Years ago, it meant using videos as part of class demonstrations, and teaching Internet research skills. A key difference now is that the technology in question is already used by the students, and in the case of Twitter may already be in their hands. This is markedly different from more top-down technology strategies, which required schools to provide their own technology for use in the classroom.

While it’s easy to virulently dismiss such practices as a hackneed attempt to be “modern,” or the result of so-called “lazy teachers,” it seems unnecessary to dismiss these new methods out of hand. Most of the criticism seems to spring from the use of these tools in the classroom, but consider their utility out of the classroom. If teachers are available by Twitter, a student with a question could simply fire off a tweet while reading an assignment. The whole class could share in the answer right away, or perhaps the next day in class.

And the issue of empowerment is an importnat one. Most adults will probably recall that, yes, a select few active students dominated class discussions. Why, then, would it be bad teaching to try and give a voice to those people who, for whatever reason, are sidelined through traditional classroom techniques? Moreover, the practice of raising one’s hand to ask a question is designed to maintain order in a class. Providing an electronic means could maintain that order, while also answering just as many questions as before. Perhaps even more, considering that many may speak online while only one can be called on by the teacher.

These techniques are new, and they are worth discussing. For the first time, digital communications are robust and familiar enough to allow fast and useful discussion among large groups of people. They will, eventually, invade nearly every facet of our lives for better or for worse. But no teacher worth his or her salt would embrace the potential distraction of computers in their classroom if it didn’t help students. Traditional teaching methods surely aren’t going anywhere — schools still have libraries, after all — and finding smart ways to utilize modern tools could help our struggling public education system.