An Actual Use for Twitter: It May be a Great Box Office Predictor

Here’s a factoid for all of the gripers out there who say that Twitter is useless: It turns out that it may have an uncanny power to predict how well movies do at the box office — even better than Hollywood Stock Exchange, which is the leading market-based stock market performance predictor.

HP Labs’ Social Computing Lab crunched the numbers, and found that by measuring in the volume of tweets about a given movie and factoring in sentiment, using the anonymous workhorses of Mechanical Turk to crunch the numbers. The result is quite striking. Here’s the graph charting the tweet rate versus the Hollywood Stock Exchange: (via The Technium) 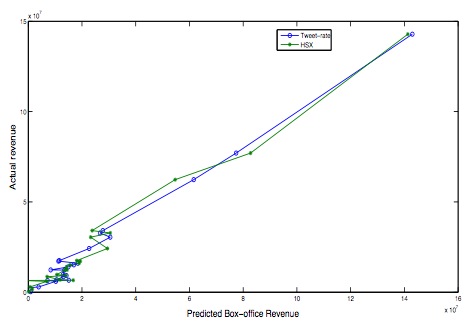 The authors of the study (warning: PDF) are exploring other applications, including product ratings and election prediction. Paging Nate Silver…

(The Technium via Kottke)