Twitter’s Ad Plan: “Promoted Tweets” for Search; Ads in Your Personal Timeline Next? 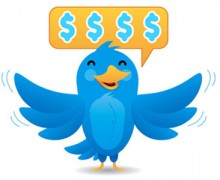 Twitter is about to get serious about making money. They’ve just rolled out their long-awaited advertising program, which they call “Promoted Tweets,” which consists, in a nutshell, of sponsored ads popping up at the top of Twitter search result pages. So far, so good, and pretty similar to what Google does.

Here’s the thing: In the Promoted Tweets FAQ, Biz Stone refers to this strategy as just “the first phase” of the platform. He writes that the next phase hasn’t yet been decided, but the FAQ and an interview with the New York Times both give pretty good hints of what it could include: Advertisements that follow you into your personal timeline.

Q. You said, “first phase”; what else do you have planned?

A. Before we roll out more phases, we want to get a better understanding of the resonance of Promoted Tweets, user experience and advertiser value. Once this is done, we plan to allow Promoted Tweets to be shown by Twitter clients and other ecosystem partners and to expand beyond Twitter search, including displaying relevant Promoted Tweets in your timelines in a way that is useful to you.

And from the New York Times‘ overview of Twitter’s new ad plan, which dispenses with the nicety of ‘maybe’ and seems to imply that sponsored Tweets in your personal timeline are a done deal:

In the next phase of Twitter’s revenue plan, it will show promoted posts in a user’s Twitter stream, even if a user did not perform a search and does not follow the advertiser.
…
Anyone who uses Google has grown accustomed to seeing ads alongside their search results, but Twitter users could resent seeing promoted posts in their personal content stream.

Twitter is aware of that risk. It is still figuring out how to determine which promoted posts should appear. It could be based on topics they are writing about, geographic location or shared interests of people they follow. “One of the reasons we’re not rolling that out right now is because we only want to show tweets that help the user experience,” Mr. Costolo said.

How is one supposed to react to all of this? Really, there’s no prescribed reaction; some small number of users will likely be mad that Twitter is ‘selling out’ no matter what, some number won’t care either way, and for the rest, it’ll come down to the implementation. At the very least, by breaking their ad rollout into phases, Twitter is showing that it’s sensitive to its community and its needs, and that’s an encouraging sign for the future.