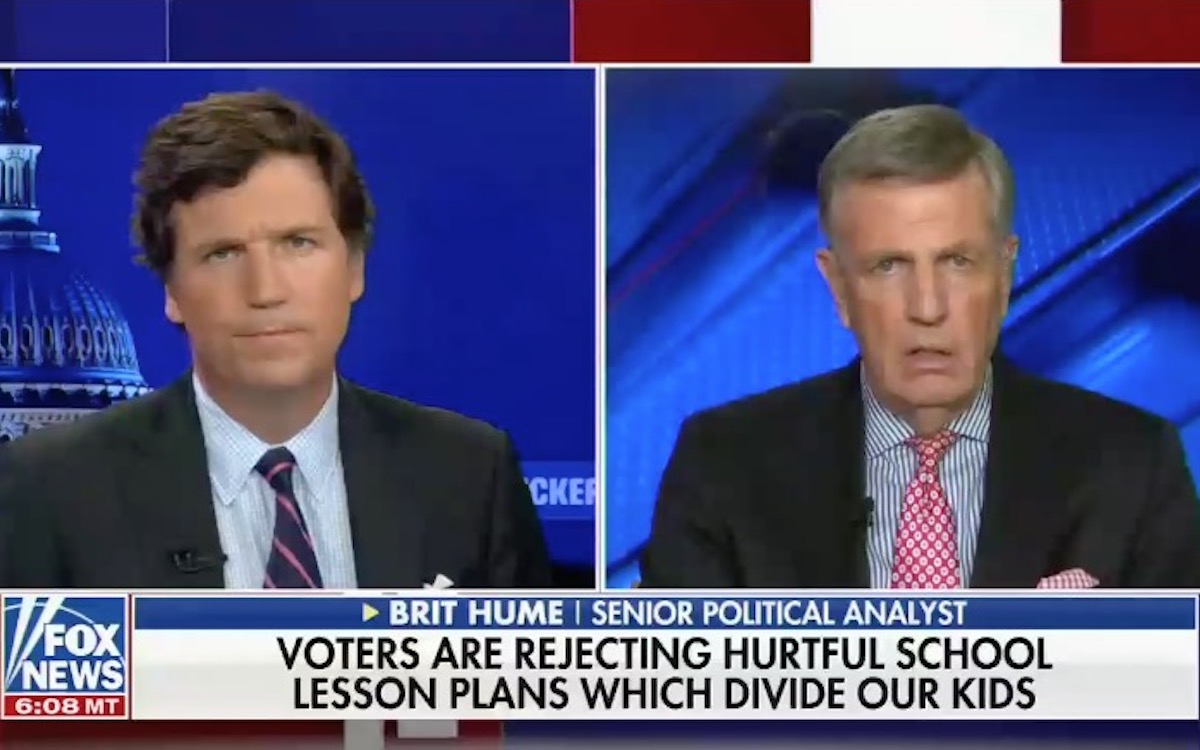 On his show Wednesday night, Tucker Carlson admitted that despite constantly bombarding his Fox News audience with the term for months on end and presenting it as one of the greatest threats to American children and our very way of life, he doesn’t actually know what “critical race theory” means.

“I have never figured out what critical race theory is, to be totally honest, after a year of talking about it,” Carlson said before going on to give the kind of description you’d expect from someone who just said he didn’t know what he was talking about: “They’re teaching that some races are morally superior to others—that some are inherently sinful, and some are inherently saintly. And that’s immoral to teach that cause it’s wrong.”

“I have never figured out what critical race theory is, to be totally honest” – Tucker Carlson pic.twitter.com/43HpfCO1cg

That is not what critical race theory is and it’s not what’s being taught in schools. This conversation about “CRT” has fully poisoned a lot of people’s brains this year, to the point that they’re harassing and threatening school board members across the country, demanding race and our country’s history of racism not even be acknowledged in schools.

We’ve heard about (white) parents nationwide who are so afraid of their children learning about racism that they’ve tried to get books like Ruby Bridge’s autobiography detailing her experience integrating New Orleans’ school system banned, and have even gone so far as to insist “both sides” need to be taught about the Holocaust. One Texas Republican recently compiled a list of 850 books that he seems to want banned from schools on the grounds that they “might make students feel discomfort, guilt, anguish, or any other form of psychological distress because of their race or sex.”

Based on this “critical race theory-based” assignment that had conservatives completely riled up online this past weekend, even discussing race as being one component of a person’s identity is too much for them to handle:

The problem is not that students are being taught white people are “inherently sinful,” as Tucker claims, it’s that a lot of white parents cannot handle discussion or even basic acknowledgment of issues of race and racism without feeling personally attacked.

The problem is not that antiracists aim to make white people feel “guilty” – the problem is that white people who aren’t involved in antiracism often interpret discomfort as “being called a bad person”, which they in turn weaponize to shut down antiracist discourse and policies.

We are clearly in the midst of a modern moral panic over a manufactured idea of “critical race theory” and it’s been fueled heavily by Fox News’ constant coverage of the fake non-issue. It is very strange to hear Carlson finally admit he doesn’t really know what CRT is, and even stranger to then hear him continue to spout disinformation about it in the same breath.

Just yesterday, Fox News’ Martha MacCallum admitted on-air that “critical race theory sometimes is a bit of a misnomer” and that “giving it that label has thrown some people off.”

Not that that means she and her colleagues will stop using it, of course.

Similarly, in this same Tucker Carlson segment, Fox News political analyst Brit Hume says that CRT is not being taught in schools. He does insist that it is influencing school curricula.

“Technically, Tucker, it is not being taught in the sense that–volumes have been written on critical race theory and it’s not been handed out as a textbook, but its influence and its tenets are in those schools. ”

And yet, by their own admission, these same Fox News personalities cannot actually tell us what those tenets are.