Does a TSA Employee With a “Small Penis” Deserve to Have His Name All Over the Internet? | The Mary Sue

Does a TSA Employee With a “Small Penis” Deserve to Have His Name All Over the Internet? 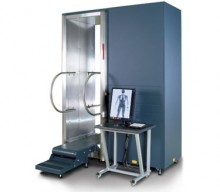 Here’s the fact pattern, if you haven’t already heard it: One way the TSA trains screeners to use full-body scanners is by having the employees screen each other using the machines. One employee who was screened in the course of the training was thereafter teased “on a daily basis” by his co-workers for having a “small penis.” He eventually flipped out and non-lethally beat up one of his daily teasers. Not going to name the employee in question here, but The Smoking Gun has the police report.

The story touched a nerve because 1) people are uneasy about full body scanners and worried that they may endure similar teasing or even have pictures of them leak onto the Internet, and 2) it involves the phrase “small penis.” Got it. It’s a tech story, a security story, and an “oddly enough” story all at once. But does the employee in question really deserve to have his name and face plastered all over the Internet, including on at least one newspaper’s website?

Yes, there is a police report, and so it’s a matter of public record, and no, he shouldn’t have beaten up his co-worker, teasing or not. But if you do a Google search of the employee’s name, the top six results now link to news stories about the employee that prominently mention the “small penis” storyline. These aren’t just dinky little blogs, either: NBC Miami and Fox News are currently in the top six.

And this isn’t even as bad as it gets on the Web: A site like People of Walmart, which was hugely covered by blue-chip outlets when it launched in late August, subjects unfortunately attired people to mass ridicule not for bookable crimes, but for the crime of shopping at Wal-Mart. (I wrote about the controversy surrounding the site at Mediaite a while back.) There’s a blog called The Dirty that trades in “reality blogging,” which doesn’t just encompass reality TV and celebrities, but includes a healthy does of nasty comments about random non-celebrities (read: people who readers don’t like and send in pictures of to the site’s staff).

The anonymity of the Internet can be an exhilarating thing, and as moot said at his TED talk earlier this year, it can lead to creativity and collaboration. But it’s worth keeping in mind that the cannon fodder for demotivational posters and LOL-oriented blog posts are living, breathing people who probably read the Internet themselves and know people who do too, that these things can last a very long time, and that while they might be anonymous strangers to the hive mind, they’re very much real to themselves.