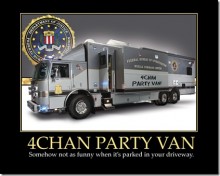 Blocking 4chan is not a good idea, according to ancient Internet lore — think “kicking a beehive” — but Verizon Wireless appears to be doing just that.

Just weeks after rolling out new boards, 4chan administrator moot reports on 4chan’s status page that “After an hour and a half on the phone, we’ve received confirmation from Verizon’s Network Repair Bureau (NRB) that we are “explicitly blocked.”

Update3: Since a lot of people are coming here through Google due to the “moot TED Talk” tag, here’s the (admittedly lo-fi) video of his talk:

While we’ve personally confirmed that the image boards are not accessible from the Verizon wireless network, we’re not certain that Verizon as an ISP is blocking the site or whether they plan to in the near future. Again, a move of this magnitude would have to have some pretty compelling justifications, and we can’t wait to find out Verizon’s reasons.

UPDATE: A Verizon NRB rep said their center has been deluged with phone calls but was unable to relate the specific reason the site has been blocked. We are continuing to call other Verizon numbers at this time, but we’ve been alerted that Verizon has not yet set up any process for dealing with media calls on this issue as no other media outlets have yet contacted them.

Oddly enough, the 4chan block appears to be affecting Verizon Wireless, but not the broader Verizon network as a whole. The two are not technically the same entity, though Verizon Communications owns a 55% stake in Verizon Wireless. Given the narrowly averted nuclear showdown between 4chan and AT&T this past summer over what turned out to be a DDoS attack  — whose worst consequence was a fake article about the death of AT&T’s CEO, but which could have gotten a lot uglier — Verizon Wireless surely must have contemplated the costs of a possible 4chan counterattack before signing off on the block.

We are looking into this. In the mean time, be prepared for another cataclysm: moot is giving a TED talk on Thursday.

Update, 11:10am: In a phone interview, a spokesman for Verizon Wireless says that “it’s nonsense that we blocked [4chan] for any other reason than some unusual activity,” and that the company is working through the situation right now. According to the spokesman, activity that “looked like spam” appeared to be originating from 4chan, and the block was a routine and temporary measure with no intent to specifically target 4chan; he said that Verizon Wireless had temporarily blocked other sites showing odd patterns of activity over the past several weeks.

The spokesman also said that to the best of his knowledge, Verizon Wireless had not been targeted by any systematic attack by 4chan users since the 4chan status page posted the news of the Verizon Wireless block.

Update2: according to 4chan’s status page, the Verizon Wireless block on boards.4chan.org should be lifted later tonight, and is similar to the AT&T block 4chan experienced last year.

Update3: Since a lot of people are coming here through Google due to the “moot TED Talk” tag, here’s the (admittedly lo-fi) video of his talk: