This Feed Shows You Exactly What Donald Trump Is Seeing on Twitter, and It’s Not Pretty 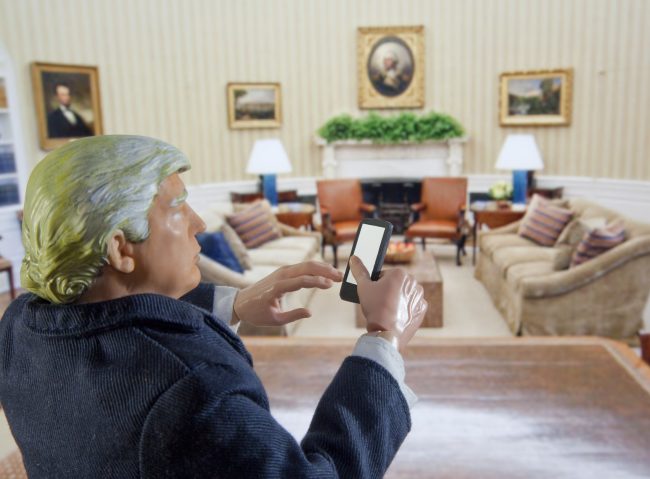 Even after his inevitable resignation or impeachment, we’ll probably never be rid of Donald Trump on Twitter. He’s stated that without the service disseminating his stream-of-consciousness, he probably wouldn’t be President. And we know that what Trump reads on Twitter heavily influences his worldview. So what does the most powerful man in the world scroll through every day?

Trump continues to use his accounts to attack “enemies” like the free press and Republican senators who pissed him off by showing a modicum of resistance to his worst schemes. Sometimes he makes sweeping policy changes via the social media platform—like his spontaneous attempt to ban trans people from the military in a series of early-morning tweets. The Department of Defense wasn’t sure, that morning, if Trump was about to declare military action in North Korea. I have no doubt that if Trump decides to bring on nuclear winter, we’ll hear about it first in 140 characters.

But Trump, an avid consumer of the very media he decries as fake, is also easily persuaded by right-wing rhetoric. Now more than ever, this dangerous inclination to absorb what he reads from the right must be tracked if we are to understand his increasingly unhinged public behavior. So Philip Bump and The Washington Post set up @trumps_feed, a Twitter account that follows the accounts that Trump does and retweets any new content from those sources. The result is as a gaze into the Trump’s Twitter (and the abyss).

Much of what Trump learns about the world is filtered through two lenses: what he watches on cable news (particularly Fox) and what he sees on Twitter. Wired’s Ashley Feinberg linked the arguments from Trump’s Tuesday news conference about the violence in Charlottesville last weekend to rhetoric that he may have picked up from Twitter or from watching Fox.

Here’s the livefeed for your viewing, erm, pleasure.

Trump only follows 45 (ugh) people from his personal account @realDonald Trump. Here’s the rundown from the Post, in the order that Trump followed them:

I know you’re not shocked to hear that a malignant narcissist like Trump wouldn’t follow anyone outside of his family, inner circle, and sympathetic media outlets and pundits. But it’s still a uniquely terrifying view to see it all laid out before you on Trump’s Feed and realize that this is the President of the United States’ primary source of information.

Thanks to @POTUS‘ efforts, consumer comfort is at a 16-year high including views about the U.S. economy https://t.co/pYcXvaSHTr

In Trump’s Feed, everything in America is going great, except when those dastardly fake news people are attacking Trump.

I’ve read this sentence 5 times and I’m still not making sense of the words.

Health warning to protestors! Do not fight with the police! Best Sean https://t.co/6um1AzFpoO

Sure, let’s condescend at protesters being brutalized by the police, Sean Hannity, you sentient oilslick.

Anyway, that’s what’s likely been on Trump’s mind recently. Fair and balanced, amiright? You can follow @trumps_feed if you want to understand the source of his latest incoherent rant. Or you can sign one of dozens of petitions to get him banned from Twitter for, you know, violations of terms of service like inciting violence and threatening to unleash fire and fury on foreign countries. They’ll never ban him, but I sometimes I wonder if Twitter’s creators wake up at night in a cold sweat, contemplating the horror, the horror of what they have wrought.