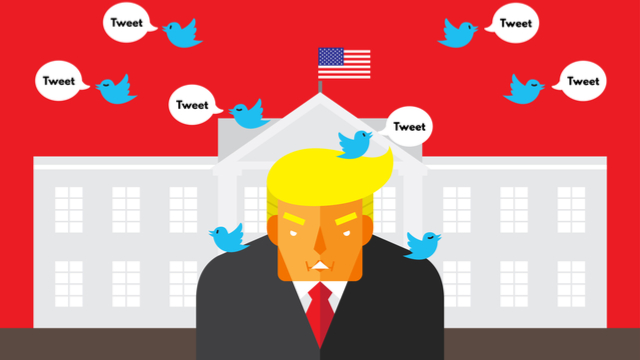 For weeks, Donald Trump has been promising to hold “THE MOST DISHONEST & CORRUPT MEDIA AWARDS OF THE YEAR” (caps obviously his). First it was supposed to take place on January 8th. Then it was pushed back to yesterday, January 17th because, as he put it, ‘The interest in, and importance of, these awards is far greater than anyone could have anticipated!”

There was still no word, though, on what this was even going to look like. Were the press supposed to show up somewhere in person? Was it a live stream? A twitter event? Even as late as yesterday afternoon, reporters were asking press secretary Sarah Huckabee Sanders what would be happening. She just called it a “potential event” and said “we’ll keep you posted.” I can tell you now from personal experience, it’s hard to plan a yelly, boozy hate-watch party around a “potential event.”

The “awards” did, in fact, happen yesterday, and they were as big of a let down as you’d expect. Not like anyone was expecting anything worth paying attention to, I know, but I was hoping for a little more trainwreck and little less fizzled whimper.

The “event”–which, by the way, posed some potential ethical hurdles for the executive branch–was scheduled for 5:00 pm yesterday. At 8:00, Trump tweeted a link to the GOP website.

Fittingly, if you clicked the link, it took you to an error page. (Tip: It’s pretty easy to claim demand and “anticipation” when you don’t prepare your website to handle a normal amount of traffic.) It took about an hour for them to get the site back up, and the result was just a list of all the sites Trump regularly hate-tweets at. The “winners” were ABC, CNN, TIME, The NYT, Washington Post, and Newsweek. The site listed specific stories that had been improperly reported to various degrees, but there were no links, no actual fact-checking, and no mention of the fact that all of the stories but one (we’ll get to that in a minute) had been corrected or retracted shortly after publication.

There was also no acknowledgement that one of the stories mentioned was an opinion piece, not a news article, and that two of the articles weren’t articles at all, but just tweets from individual reporters that never made their way into print. (They were also both corrected  by the reporters almost immediately.)

The final “winner” of the fake news awards wasn’t even a specific article or media outlet. It was simply “RUSSIA COLLUSION!” The site stated, “Russian collusion is perhaps the greatest hoax perpetrated on the American people. THERE IS NO COLLUSION!”

So in the end, none of the outlets who campaigned for an award–Samantha Bee, Stephen Colbert, or we here at The Mary Sue–were recognized. Jimmy Kimmel did hold his own personal Fake News Awards with a Fake Wolf Blitzer. (Turns out Kimmel’s dad is a dead ringer for Blitzer.)

Good to know that the Trump and the GOP are keeping busy. It’s not like there are hundreds of thousands of people fearing deportation or an impending government shutdown or anything for them to deal with.