I apologize to babies, who are no doubt repelled by Alex Jones. 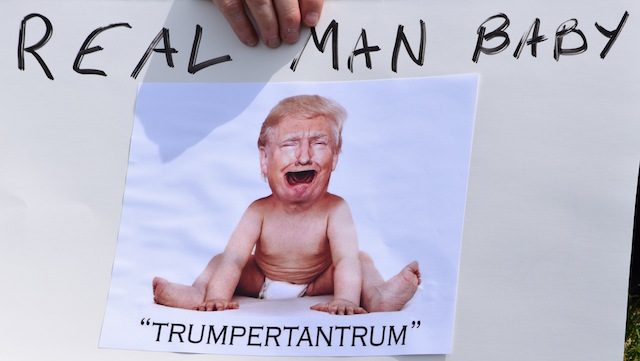 Perhaps the only thing that equals the magnitude of Donald Trump’s media appetite is just how embarrassingly bad the resulting diet is. His Twitter feed is a nightmare hellscape of conspiracy theories and veritable trash people, and he watches about as much far-right media as your one family member who still yells about people getting “Obama phones” and shares deliberately misleading pictures of gas prices under President Obama and President Bush.

It’s been reported that his new chief of staff, John Kelly, is on a mission to change that, although I don’t know how he’s going to do it without physically prying Trump’s Twitter machine from his stubby little fingers. Kelly’s apparently doing his best to make sure that “news” from sources like InfoWars, a.k.a. Alex Jones’ Pretend-Time Hour, don’t wind up on Trump’s desk.

Despite how angry that makes right wing media, it’s pretty good news … until you realize how low the bar has to have fallen for this to be “good news.” Yeah, we’re all better off if Donald Trump is no longer getting his “news” from the most toxic corners of the internet and/or Fox News (not a huge difference), but we’d be so much better off if the person occupying the White House could actually tell between fact and fiction on their own.

This was illustrated brilliantly in a statement to BuzzFeed White House Correspondent Adrian Carrasquillo, who asked a former spokesperson for President Obama’s National Security Council, Tommy Vietor, about the previous administration’s practices on controlling the flow of news in the Oval Office. Vietor responded, “To answer your question. No. President Obama is an adult who can independently vet information so we treated him accordingly. President Trump’s staff apparently believes that he’s too stupid to figure out that Infowars is garbage.”

To put it in terms Trump can understand: Sitting in the big boy chair should mean acting like one. We, and the rest of the media, have spent months pointing out Donald Trump’s childlike tendencies, lack of a grasp of basic facts, and general unfitness for office, but those who really need to hear it are never going to listen to us. Maybe—just maybe—they can look at his staff’s inability to trust him with basic life skills like distinguishing crackpots from news reporters and draw their own conclusions.

(via The Hill, image: Lorraine_M / Shutterstock.com)