Why Is Donald Trump Ranting About “Shadow Banning” of Republicans? 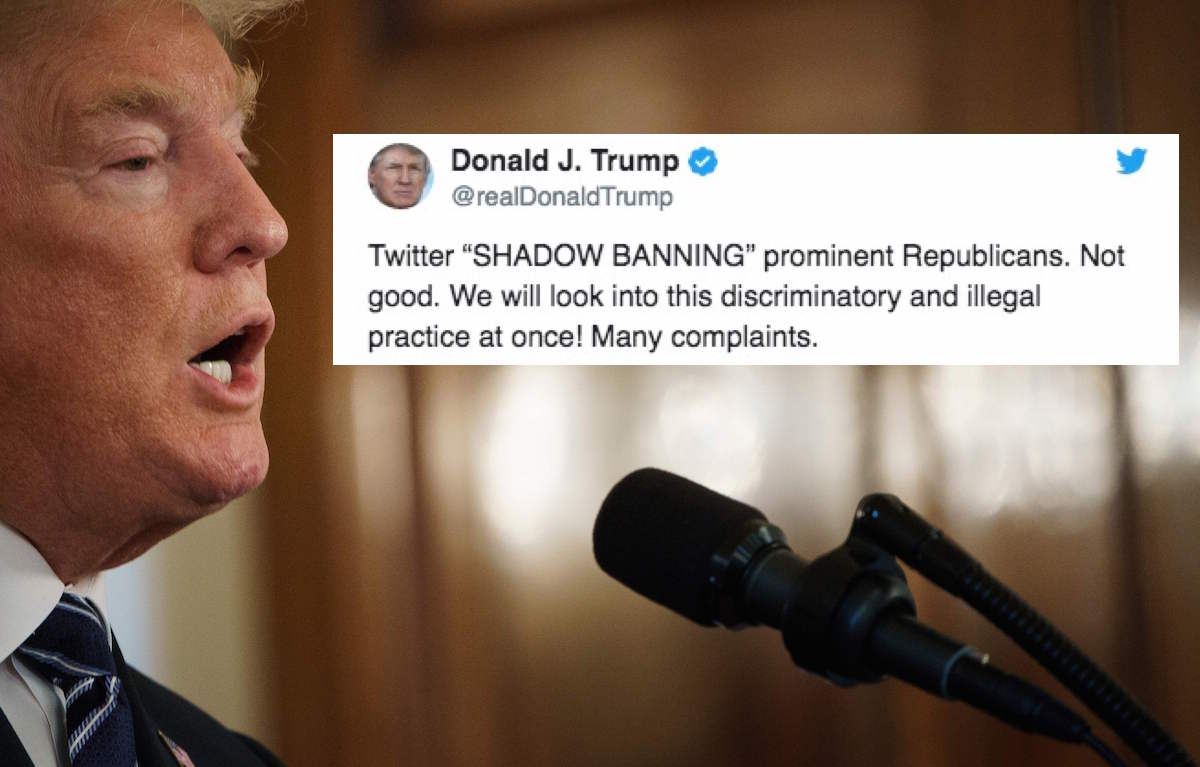 Twitter “SHADOW BANNING” prominent Republicans. Not good. We will look into this discriminatory and illegal practice at once! Many complaints.

“Shadow banning” differs from a regular ban or block, because the person in question can still post, but the reach of their account has been restricted without their knowledge. The user doesn’t know that others can’t see their comments, leaving them to yell into the void.

So why does Trump think Twitter is silencing conservative voices? A number of conservatives have been saying as much recently. Fans of a number of known white supremacists, like Richard Spencer and Unite the Right organizer Jason Kessler, reported that those accounts no longer autofilled in Twitter’s search bar, leading them to assume the platform was deliberately restricting access to their accounts. Other Republicans reported similar incidents, like RNC chair Ronna McDaniel and several Republican congressmen.

A few major outlets reported on the Republicans apparently being “demoted” or buried,” but it looks like an article from Vice News may have been what gave undo validity to the idea of outright shadow banning. First of all, not showing up in a search autocomplete is not shadow banning.

While Twitter denies the idea that political leaning influences their algorithm, they have been taking steps to “reduce people’s ability to detract from healthy public conversation.” They’re now saying that there may have been a bug in their constantly evolving behavioral ranking methodology that could have affected search results, although if it was white supremacists and Donald Trump Jr.’s spokesperson that found themselves affected, I’d be more inclined to call it a feature than a bug.

On top of all of that, the autocomplete bug wasn’t just limited to conservative voices, but I suppose it’s just too much more fun to pretend like it was. Remember what Trump tells us: “What you are seeing and what you are reading is not what’s happening.”

can you tell me how these leftists also being “shadow banned’ comports with your framing? pic.twitter.com/ngr4ULr9XE

So what of these “many complaints” Trump tweeted about? Apparently, ever since the Vice article was published, it’s given conservative users license to cry their own all-caps “SHADOW BAN” whenever they don’t understand how Twitter works.

Sheriff David Clarke locked his account for some reason. Let’s see how his fans are taking the news. pic.twitter.com/9BSTjJOf6x

Twitter has been saying for a while that they’re trying to curb “troll-like behaviors.” Every time they make a push for that, white supremacists and conspiracy theorists take the brunt of it, and people get mad that “conservatives” are being censored. Again, that doesn’t seem like a bug. That seems like things are working just fine. (It also seems like Republicans might want to address who it is that’s defining their party politics.)