But did Mexico pay for it? 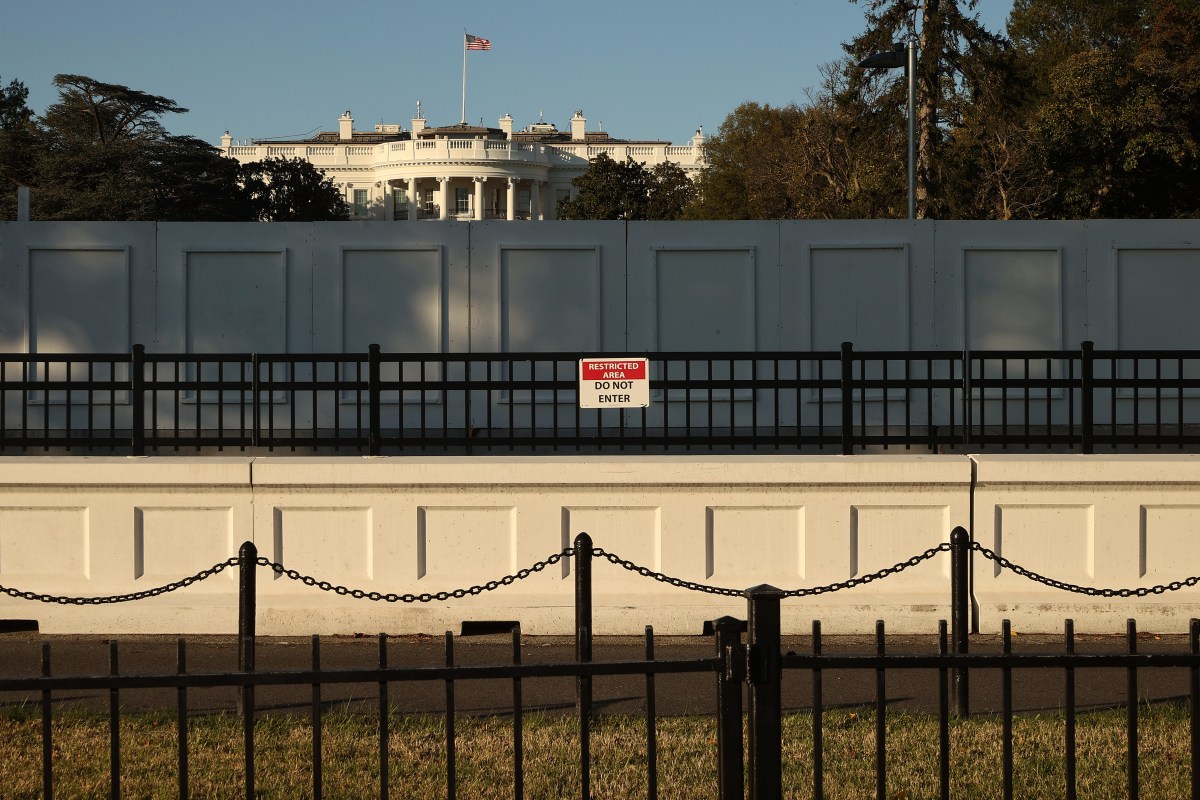 Amid fears of potential civil unrest, President Donald Trump has decided to build a protective wall around the White House. A “non-scalable” fence has been built around the perimeter, barricading the president and his family inside. In addition, some 250 National Guardsmen are waiting on standby. Just in case.

The president, who talks a big game but is a terrified little man, previously took refuge in the historic home during the George Floyd protests, hiding in the subterranean safety bunker. This earned him the nickname “Bunker Boy” and the mockery of much of the country.

Chris Rodriguez, the director of DC’s Homeland Security and Emergency Management Agency, told reporters that “we don’t have any specific or credible threats for [around] the election,” but many across the country are preparing for the worst. Businesses are boarding up their stores in advance of riots, and police departments are on high alert throughout the week.

It’s not so much the wall that is offensive: it’s Trump’s blatant hypocrisy. Just two days ago, he was encouraging supporters to harass and intimidate the Biden campaign, celebrating a coordinated attack on a Biden campaign bus. Trump tweeted, “I LOVE TEXAS!” along with a video of a Trump truck caravan surrounding and slowing down the Biden tour.

Also, and I realize this is hardly the biggest issue, but WTF is is up with that wall? It looks like two giant kitchen cabinets with an iron fence running in the middle. It also looks very climbable. Was this designed at an Ikea? I’m very confused. Arcus Group, the security and event management company erecting the wall, is run by former aides to Trump, because why build when you can also grift? The contract will cost the government $988,788.

in an apt metaphor, the “non-scalable barrier” around the White House that went up is wood paneling painted to look like concrete and does not entirely surround the area https://t.co/M73NAI6qmy

Trump is now getting roasted on social media for his White House wall, aka the only wall he ever successfully built.

He promised to build a wall. Who knew it would be around the White House? https://t.co/8gQ6wVMwWw

Trump has used our tax dollars to fortify the White House with a giant wall because he’s a damn coward. He’s obstructing our votes because he’s a coward. Every @GOP politician who refuses to denounce this is a coward. #VoteThemAllOut pic.twitter.com/WwLKIXkXgQ

Trump’s wall-building-around-the-White-House stunt tells us all we need to know about the outcome of the election. He’s digging in (literally) because he KNOWS he’ll lose. If he thought we was gonna win he’d be arranging a money-grabbing celebration at one of his hotels. #Vote

At the end of four years the only wall Trump built was around the White House, aka “the people’s house” pic.twitter.com/XGpSvEe8eJ

Trump to build a wall around the White House. pic.twitter.com/SgC1v5wcEo

2016: Stop calling him a fascist, do you have any idea how hysterical you sound??

2020: Will Trump accept the result of the election? We leave the militias trying to intimidate voters to now go live to his bunker. pic.twitter.com/1rRpyEQrDD

Obama didn’t have to turn the White House into a bunker on election night https://t.co/ooRLzrcG9I

How it started: How it’s going: pic.twitter.com/HYNjpwBdgX