Things We Saw Today: Trump Isn’t Sure If He Will Accept November Election Results 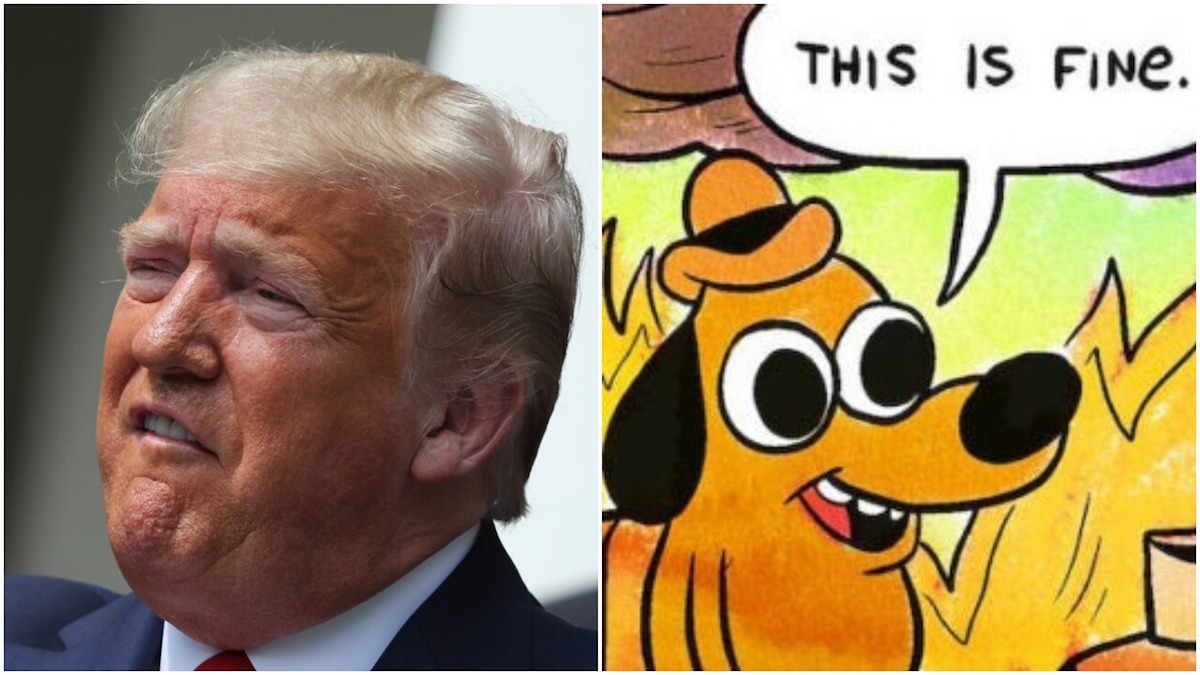 And now, on another fun episode of America’s Slip ‘N Slide Into Fascism: if secret police pulling Portland protestors into unmarked vans wasn’t enough for you, Donald Trump “declines to say whether he will accept November election results.” Ha ha ha ha this is fine. As in we are all the This Is Fine dog and the United States is on fire.

The latest “when they tell you they’re fascists, believe them” comes courtesy of The Washington Post, which reported on Trump’s interview with Fox News’ Chris Wallace. (This is the same interview where Wallace actually fact-checked the Prez on one of his many, many lies.)

President Trump declined to say whether he will accept the results of the November election, claiming without evidence that mail-in voting due to the coronavirus pandemic could “rig” the outcome.

In a wide-ranging interview with “Fox News Sunday” host Chris Wallace, the president also continued to play down the severity of the coronavirus crisis in the country, declined to say whether he is offended by the Confederate flag and dismissed polls showing him trailing former vice president Joe Biden by a significant margin.

Trump’s latest refusal to accept reality, and his very real threat to “wait and see” before he decides whether or not to let democracy take its course, came after Wallace asked him if he considers himself a “gracious loser.” Spoiler alert: He does not!

Trump’s horrific mismanagement of the coronavirus has seen his support fall across the country, and a majority of Americans now say they do not trust him in regards to the virus. With Joe Biden significantly ahead in polling nationwide and in swing states that were essential in delivering Trump to the White House, barring some improbable 180-degree turnaround before November, it’s become clear that it will be extremely difficult for Trump to win reelection. But that might not stop him from trying to keep being President.

Trump replied that he doesn’t like to lose, then added: “It depends. I think mail-in voting is going to rig the election. I really do.” Trump’s comment echoed unfounded claims he has made in recent weeks that mail-in voting is susceptible to widespread fraud.

“Are you suggesting that you might not accept the results of the election?” Wallace asked.

Trump responded, “No. I have to see.”

He’s actually just saying it out loud now. This man may not accept the outcome of the election. He’s not kidding, or being sarcastic, or having a slip of the tongue.

Pressed again on the topic later in the interview, Trump reiterated the stance that he won’t say whether he will allow for the peaceful transference of power until he can take a gander at the results in November.

His reality-warping thoughts on this topic are legion, because even those polls suggesting he is behind are faked, you see:

“I’m not losing, because those are fake polls,” he said.

Wait, there is yet still more. Trump is now equating the coronavirus, which can cause devastating long-term effects even in people who “recover,” with “sniffles”:

On “Fox News Sunday,” Trump played down the recent spike in U.S. coronavirus cases, arguing that “many of those cases shouldn’t even be cases.”

“Many of those cases are young people that would heal in a day,” he claimed. “They have the sniffles and we put it down as a test.”

This is where we’re at, America. We are sick, we are on fire, and we are not fine.

Uhhh, what else did we see today?