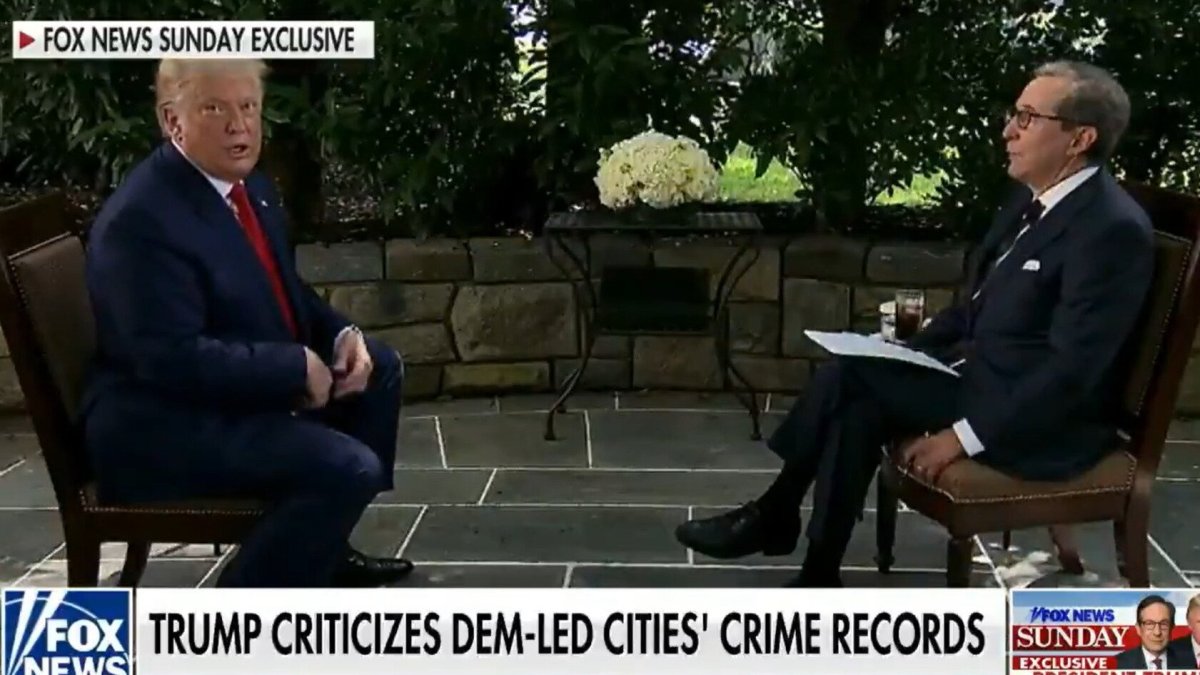 Catching Donald Trump in a bold-faced lie is, unfortunately, not a rare occurrence. Nor is a member of the press calling him out on his falsehoods unheard of, but it’s still nice to see a reporter do it right to Trump’s face in an interview where the President can’t just call on another reporter or storm away. And to add spice, today’s confrontation came from Chris Wallace of Fox News. This is a network that Trump expects to be gentle with him, since they usually handle everything Trump-related with kid gloves and reality-warping spin.

Here’s the exchange which aired on Fox as a preview of a longer sitdown interview Wallace did with the President, set to air on Sunday.

Now, there’s a lot to nod along to about this. For one, Chris Wallace doesn’t let Trump get off easily by just blaming “democrats” for violence in cities. I know there was no chance Trump was going to say “systemic racism,” but Wallace was right here not to let him off the hook with a non-answer.

But the real delight comes as Trump starts to claim that Joe Biden wants to abolish the police and Wallace immediately corrects him and then doesn’t let that go. If there’s one thing Donald Trump hates, it’s being made to look foolish (which is ironic considering he always looks foolish). His immediate, petulant response to being called out for a complete lie is laughable. “Let’s go!” he exclaims, demanding someone run off and get the documents.

And the capper is Wallance chuckling at the President’s foolishness afterward, noting that Trump couldn’t find anything in the “charter” about Biden wanting to abolish or defund the police. To be clear here, Joe Biden doesn’t want to abolish the police and hasn’t come out in favor of defunding them either, but he does want the police reform that millions of other Americans do.

It’s great that Wallace didn’t let this go unchallenged, though it also would have been nice to hear him say that making being in favor of “abolishing the police” an attack on Biden is a racist dog-whistle. It’s Trump telling his white, racist supporters that Joe Biden will threaten their safety. It’s a lie but it’s also meant to stoke fear. It would also be nice if fact-checking Trump became the norm for Fox News, which has created an alternate reality for its viewers that stokes Trump’s ego, misdirects on his crimes, and villainizes the president’s opposition. Wallace shouldn’t receive an award for doing the minimum that his job requires and that Fox News would be doing every day if it truly cared about veracity.

It will be interesting to see what other nuggets of goodness make it out of this interview, but for now, at least it’s pleasant to think about Chris Wallace getting under the president’s skin, in 100-degree weather no less, and showing that, once again, Trump can’t take the heat.