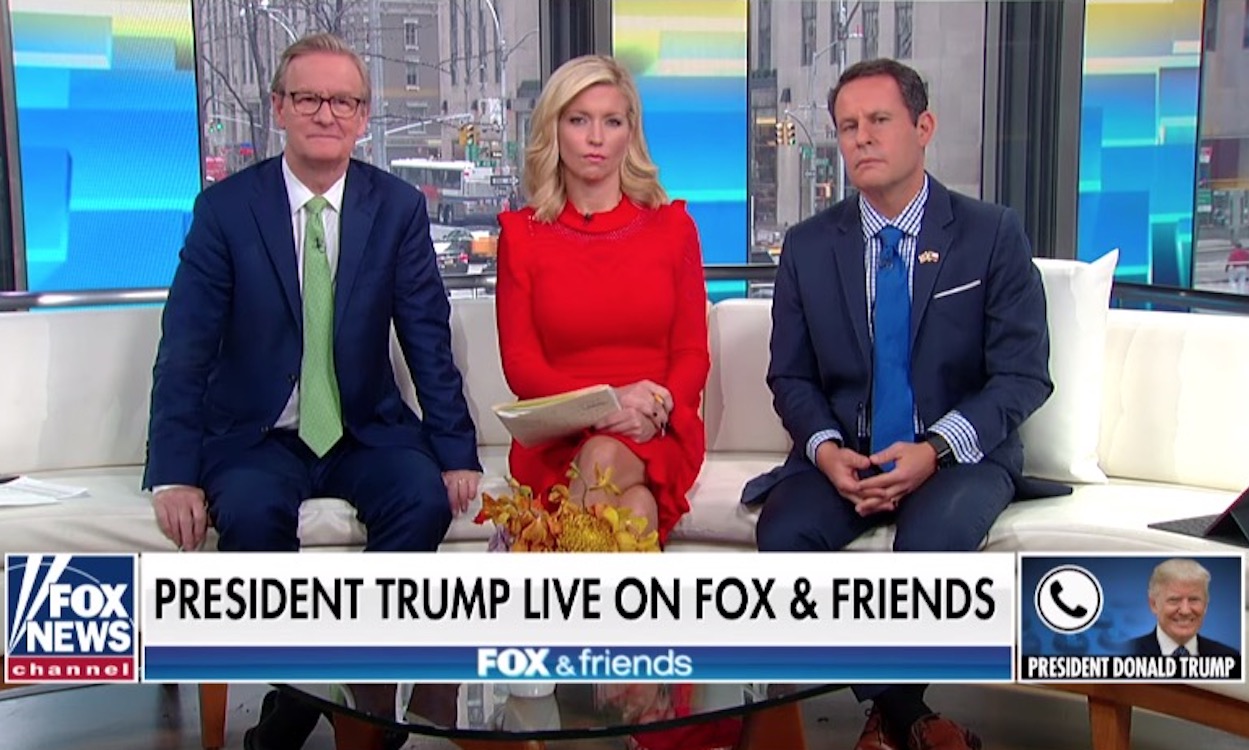 Donald Trump called into Fox & Friends—his #1 favorite show—this morning for an “interview” and ended up ranting for just shy of an hour. It was … a lot.

Trump used the majority of the time to rail against the impeachment proceedings. He bemoaned the lack of “due process” (ignoring the fact that impeachment is due process) and insulted the witnesses.

Using an antisemitic dog whistle to describe the witnesses, two of whom are children of Holocaust survivors. https://t.co/MBrh0jBzmK

He defended his “perfect” call with Ukrainian President Zelensky, using words that don’t actually mean what he probably thinks they do.

He rambled about Hong Kong (“If it weren’t for me, Hong Kong would have been obliterated in 14 minutes”), the border wall (“The wall is electrified, so that if anybody touches it we know exactly what’s happening”), and more, often jumping between subjects in ways that I’m guessing make sense inside his brain but definitely nowhere else.

Case in point:
Fox & Friends tries to ask about 2020. Trump goes back to impeachment, calling it “a continuation of the witch hunt.” Then brings up “the two lovers” (Strzok and Page), then attacks Comey “as a totally disgusting human being,” also mentions McCabe.

AInsley Earhardt asks about the border, but first Trump complains that if Obama had killed Abu Bakr al-Baghdadi “it would be a two year story. With me, I got a day. Not that it matters.” pic.twitter.com/yLA3Px80op

As part of the impeachment rant, Trump pushed the “CrowdStrike” conspiracy theory, which Fiona Hill touched on yesterday. If you’re not familiar (I envy you), the theory’s supporters claim that it was Ukraine, not Russia, that meddled in the 2016 presidential election. CrowdStrike is the name of the security firm hired by the DNC to investigate the hack and these conspiracy theorists believe that the company is hiding a server in Ukraine. They also believe the Biden family has been conspiring against Republicans in Ukraine.

Hill and diplomat David Holmes both spoke Thursday about how ridiculous, unfounded, and genuinely dangerous these theories are. But Trump refuses to let them go.

On Fox & Friends, President Trump promotes the completely debunked Crowdstrike conspiracy theory about Ukraine. Steve Doocy asks if he is sure that’s what happened, and Trump replies “that’s what the word is,” going on to ramble about other countries not “putting up money.” pic.twitter.com/uGXZ4tMBic

His claims are so farfetched that even Fox’s Steve Doocy pushes back, albeit tepidly, asking if Trump was “sure” about all this.

Extremely low bar, but the Fox & Friends hosts have actually pushed back on some of his false claims and/or asked him to clarify/specify his source (he didn’t).

We’ve reached the part of every Fox & Friends interview where the hosts start getting noticeably worried about how unhinged the president is.

The only thing really worth noting in this hour-long mess is that it 100% backs up David Holmes’ account of overhearing a phone call between Trump and Gordon Sondland. Holmes says he was present with Sondland during the call but could hear Trump’s side of the conversation, specifically him asking about “the investigations.”

Holmes says he could hear Trump easily and clearly because his “voice was very loud and recognizable”—so loud that he says Sondland would wince and hold the phone away from his ear when Trump was speaking.

Trump has repeatedly said it’s impossible to overhear a phone call if the person isn’t on speakerphone.

Not that any of us really doubted it, but this interview makes it clear who’s in the right here.

TRUMP: There’s no way David Holmes could’ve overheard me talking on the phone with Sondland

ALSO TRUMP: *calls in to Fox & Friends and yells for 45 minutes, making it abundantly clear it’d be easy to overhear him* https://t.co/hGpMBrhf27

but both brian kilmeade and the loudass in question say this is impossible, so checkmate lib https://t.co/W8ZBLgBQMW

(image: screengrab)
Want more stories like this? Become a subscriber and support the site!