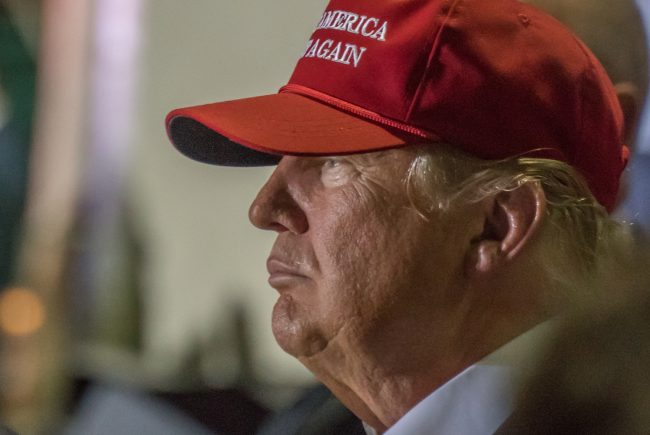 Trump took his dictator act to the next level last night with a campaign-style rally in Florida. Speaking to a crowd of approximately 9,000, he railed against the media with authoritarian fervor. This sort of rhetoric was terrifying enough when it came from a presidential candidate; coming from a sitting president, who just stepped off Air Force One, it’s absolutely chilling. Much as I want to avoid giving him the publicity he so obviously craves, his language was disturbing enough to warrant documenting.

Per usual, he attacked the press that is tasked with keeping him responsible, saying he held the rally in order to speak to voters “without the filter of the fake news.” This sort of language is classically authoritarian, establishing the president as the only true source of information. All others lie; only the Great Leader tells you like it is.

“The dishonest media which has published one false story after another, with no sources — even though they pretend they have them, they make them up in many cases. They just don’t want to report the truth.” As is typical of Trump’s claims, this accusation of fake sources has no evidence behind it.

“When the media lies to the people, I will never let them get away with it. I will do whatever I can so they don’t get away with it,” he said. “They have their own agenda and their agenda is not your agenda.” There’s a threat couched in this language–“do whatever I can”–that raises even more alarm bells, especially given that he spoke of “open[ing] up” libel laws on the campaign trail.

Lastly, Trump also promised more executive action and legislation to come (but only after referencing a non-existent terror attack in Sweden). He pledged to produce an Obamacare plan in “a few weeks,” and a follow-up executive order on immigration next week. “I think you’ll be impressed,” he said.

(Via NPR and CNN; image via Shutterstock)

donald trumpfreedom of the press