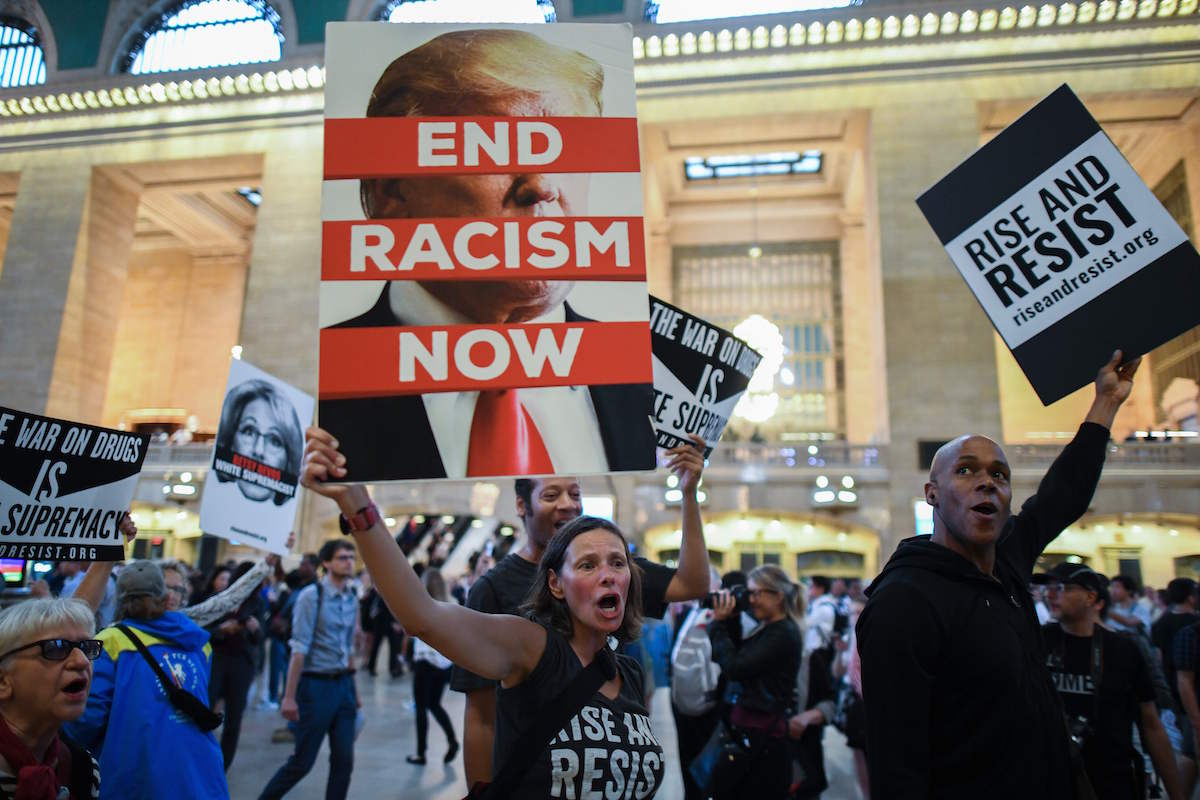 Former Trump aide & reality TV star Omarosa Manigault-Newman has been making the rounds, promoting her new book, dropping what would, in a normal presidency, be revelatory bombshells. She’s released secret recordings and she says she has tapes of Trump using the n-word. She has released a recording that appears to have captured a number of political aides discussing then-candidate Trump’s use of the word.

Again, this would have the potential to destroy a normal president. But as with so much else that should, by all existing logic, take Trump down, it’s hard to imagine that this tape would make that big of an impact, even if it were released to the public. Because even if Donald Trump were caught on tape saying the n-word, it wouldn’t tell us anything about him we don’t already know.

Trump has revealed himself to be a racist over and over and over again and anyone that doesn’t already think so has had to work hard to ignore his past racist words and actions. If someone needs a tape of him saying the n-word to believe he’s a racist, they’re not the kind of person who would actually care if and when that happened.

Let’s do a brief rundown of the things we’d have to have ignored to need this tape in order to believe Trump is racist.

He said Mexican immigrants were “in many cases, criminals, drug dealers, rapists, etc.” (And that wasn’t even close to the only time he’s insulted Mexico and equated Mexican immigration with crime.)

He reportedly said too many immigrants are coming to the U.S. from “shithole countries,” stating his preference for immigrants from European (read: white) countries.

He also reportedly said that all Haitian immigrants have AIDS and that Nigerian immigrants would never “go back to their huts” once they’d been let into the U.S.

He once tweeted that “the overwhelming amount of violent crime in our major cities is committed by blacks and hispanics.”

He introduced a ban on immigration from Muslim-majority countries.

He played a major role in perpetuating the totally bogus and entirely racist “birther” conspiracy, which questioned the citizenship of President Obama and purported that he was actually born in Kenya.

He refused to condemn white supremacists marching in Charlottesville at a rally that left counterprotestor Heather Heyer killed, saying there were “very fine people on both sides.”

In 1989, he called for the death penalty to be reinstated in the case of the Central Park Five, five young men (4 black and one Hispanic) convicted of raping a white female jogger. They were exonerated in 2002, but still, nearly 30 years later, Trump insists they were guilty. He said of the five, “These young men do not exactly have the pasts of angels.” (He also said of their case “settling doesn’t mean innocence,” which seems odd considering just how many lawsuits he’s settled.)

He’s also publicly placed himself on team “why can black people use the n-word and I can’t?”

“@EDM___HEAD: @realDonaldTrump @EdandBev lyin ass nigga” Why does Paula D get destroyed and you can use the “N” word so freely, asshole?

Trump’s history of racism isn’t limited to his time in politics (no matter what Sarah Huckabee Sanders tells reporters). In 1973, he was sued by the Justice Department for racial discrimination after allegedly refusing to rent apartments to multiple black prospective tenants. (The case was *ahem* settled with no admission of guilt.)

Sarah Huckabee-Sanders says “It wasn’t until he became a candidate for President that you started to hear some of the salacious and ridiculous claims.”

The Justice Department sued Donald Trump for discriminating against black people…… in 1973.

That’s just a smattering. Trump’s racist statements and actions are so innumerable, they have their own Wikipedia page. Incredible for someone who declared himself “least racist person there is.”

Mitt Romney had his chance to beat a failed president but he choked like a dog. Now he calls me racist-but I am least racist person there is

If you still believe Trump on that one, I can’t imagine a tape of him saying a word, even that word, would convince you. Just as a tape of him bragging about sexual assault didn’t convince his supporters he was too misogynistic to be elected. That’s not to say the tape shouldn’t be released if it exists. I just wish it would make a difference in terms of what lengths his supporters will go to justify his vile behavior.