Brett Kavanaugh too, while we're at it. 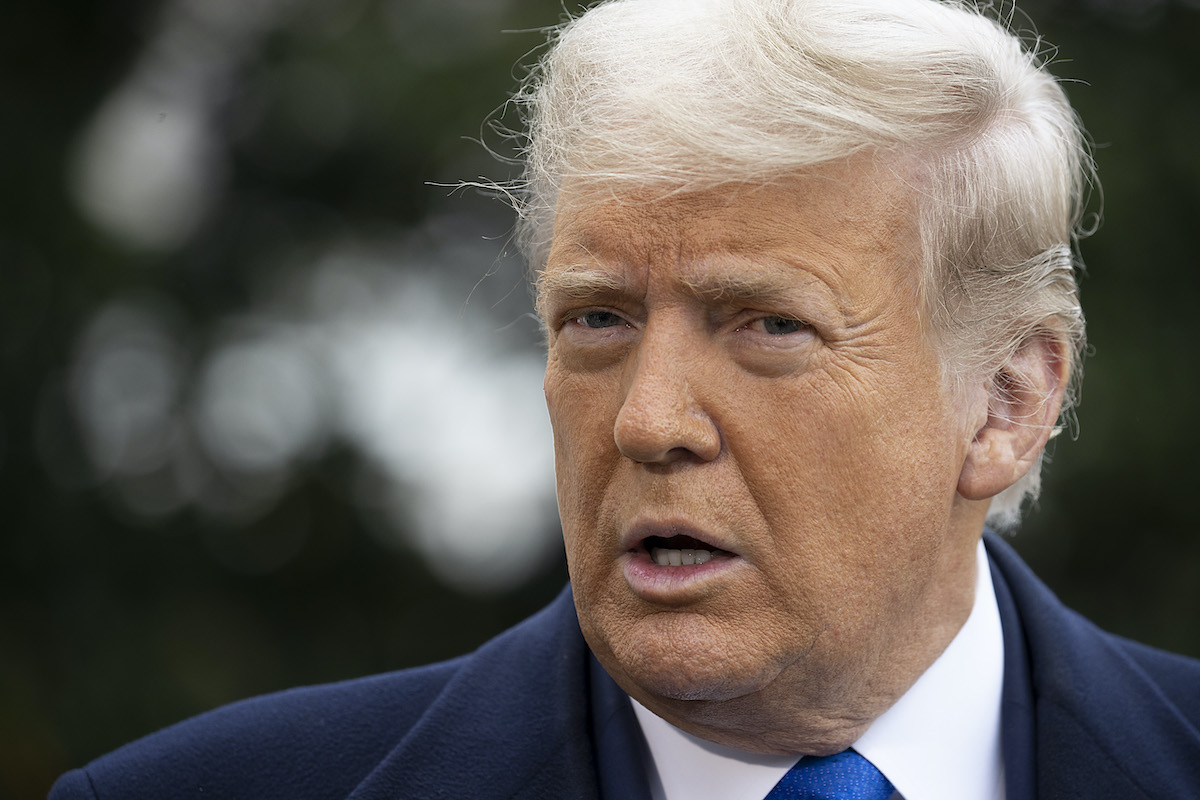 We all know that Donald Trump values television above just about everything else. He sees everything through the lens of ratings. And despite being a purported real estate mogul, the New York Times’ investigation into his taxes revealed that NBC’s The Apprentice was the only reason he had any money at all (until he lost all that, too).

So it’s not surprising that he also seems to think television networks are in charge of deciding who the president is.

Trump has been leading the charge in the argument against counting votes received after Election Day, which is straight-up voter suppression and would lead to the likely elimination of hundreds of thousands of votes. Of course, Trump wants this because according to a number of polls, the majority of people who have voted early or by mail are Biden supporters. So Trump is fighting to have any ballot received after November 3rd thrown out, despite the fact that a number of states have established deadlines after that date.

“We’ll see what happens at the end of the day [on Election Day]. Hopefully it won’t go longer than that. Hopefully the few states remaining that want to take a lot of time after November 3rd to count ballots, that won’t be allowed by the various courts.”

On Monday, Trump tweeted, “Big problems and discrepancies with Mail In Ballots all over the USA. Must have final total on November 3rd.” Twitter flagged that tweet as possible misinformation (which it is).

Just this morning, he angrily tweeted about a Supreme Court decision that will allow absentee ballots in North Carolina to be counted if they are postmarked by Election Day and received within nine days after that.

“This decision is CRAZY and so bad for our Country,” he wrote. “Can you imagine what will happen during that nine day period. The Election should END on November 3rd.”

This decision is CRAZY and so bad for our Country. Can you imagine what will happen during that nine day period. The Election should END on November 3rd. https://t.co/Hkftv9Jp56

The thing is, the election is never actually officially over and decided on Election Day. The only thing that happens the night that polls close is that news outlets make a projection based on the results available at the time and exit polling. (That’s a major simplification of the process but it’s the basic gist.)

Can you repeat that pic.twitter.com/LyElYuU8y6

So no matter what Trump thinks and tweets, just because the TV says a candidate won, that is not the end of the election.

The president thinks that tv networks “calling the election” is legally binding and not the certification that happens weeks later. https://t.co/LifRJtD0Rj

On election night, news networks make a prediction of how many electoral college votes each candidate will receive, based on the projected popular vote results in each state. But the electors don’t actually meet and vote until mid-December.

From the Congressional Research Service (which has a thorough breakdown of the entire election process):

Following election day, the states are to count and certify popular vote results according to their respective statutory and procedural requirements. When the states have completed their vote counts and ascertained the official results, the U.S. Code (3 U.S.C. §6) requires the state governors to prepare, “as soon as practicable,” documents known as Certificates of Ascertainment of the vote.

“As soon as is practicable!” Not “on election night itself.” The process takes weeks and that’s by design.

Trump is so committed to his own ignorance on electoral information that it’s hardly surprising to hear him spout these falsehoods, but it’s genuinely scary to hear them also come from sitting Supreme Court Justices.

In a concurrence he wrote on the court’s recent 5-3 decision to block an extension for mail-in ballots in Wisconsin, Brett Kavanaugh wrote that deadlines were needed “to avoid the chaos and suspicions of impropriety that can ensue if thousands of absentee ballots flow in after Election Day and potentially flip the results of an election.”

“Those states also want to be able to definitively announce the results of the election on election night, or as soon as possible thereafter,” he wrote, even though states are not supposed to have definitive results that night! That’s not how it works!

Which is what Justice Elena Kagan told him when she wrote in her dissent that “there are no results to ‘flip’ until all valid votes are counted.”

Late-arriving ballots can’t change the result of an election. They are PART of the election result.

Kavanaugh’s faulty logic is already being used in other cases in lower courts, by the way.

And just like that 2 GOP judges on 8th Circuit cite Kavanaugh’s insane & factually inaccurate decision in Wisconsin case to change Minnesota’s deadline for receiving ballots from 11/10 to 11/3, five days before the election when 580,000 mail ballots still outstanding https://t.co/KT6ZiIyDXz

It’s baffling that counting votes has become a partisan issue, but that’s where we’re at.

The Supreme Court rules that all absentee ballots must be counted in NC and PA and it’s described as a win for Democrats. But it’s a win for America. The fact that Republicans think it’s a loss for them tells you everything you need to know. #VOTE

It is a victory for COUNTING VOTES not for DEMOCRATS https://t.co/GjoBAHpvCX

If you still have an unreturned absentee ballot and you’re able to drop it off in person rather than return it through the mail, it’s probably a good idea to do so at this point. You can find a dropbox near you here.