This makes him the only person to have been held accountable for Trump's deadly policies. 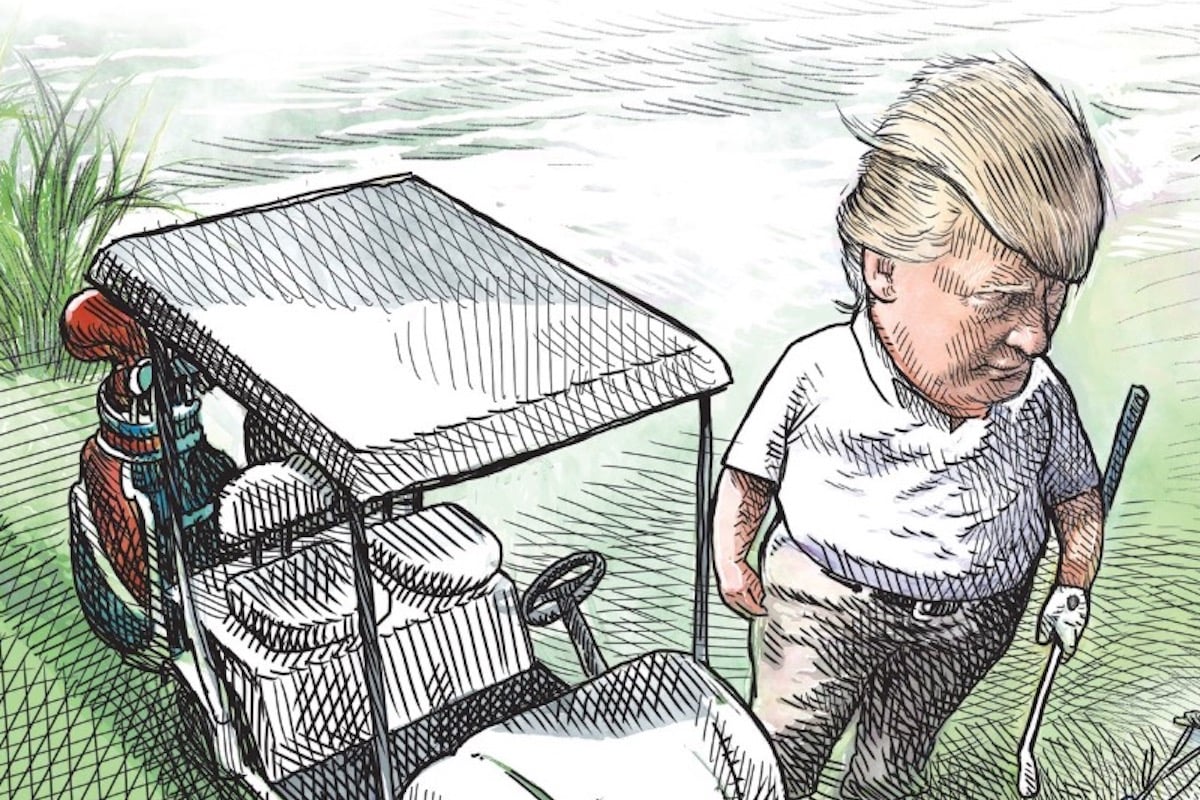 Canadian cartoonist Michael de Adder was fired after his illustration of Donald Trump went viral last week. On Wednesday, de Adder tweeted the cartoon, which depicted a golfing Trump standing over the bodies of the father and daughter who drowned trying cross into Texas via the Rio Grande, whose horrifying picture got so much media attention last week. Trump is asking to “play through.”

The image took off, with thousands of people all rushing in to make the same joke: that the most unrealistic part of the cartoon is Trump’s polite demeanor. De Adder did clarify that that was a choice.

I tried less polite Trump and felt “do you mind if I play through” to be more delusional and dismissive of reality. It was a cartoon choice. Of course he’d be more rude in real life.

But two days later, de Adder announced that his contract with a publishing company had been terminated, and he would no longer be drawing for any of the newspapers in New Brunswick.

According to Wikipedia, de Adder “draws approximately ten cartoons weekly and, at over a million readers per day, is considered the most read cartoonist in Canada.” (The publishing company denies that this cartoon was the reason why his contract was so suddenly terminated.)

“I’ve got to admit, it hurts pretty bad. I’m a New Brunswicker,” he wrote on Twitter. “I loved drawing cartoons for my home province. I’m a proud New Brunswicker.” He stresses that he’ll be fine and he has other freelancing gigs, plus a book coming out in September. Still, this is a blow.

I’m not the type of person who’s going to make a career out of being fired.I’m still successfully drawing cartoons for other publications.I just need to recoup a percentage of my weekly income and get used to the idea I no longer have a voice in my home province.

And this is absolutely heartbreaking:

The hardest part in all of this,I have a mother with dimentia in NB who has a hard time remembering her family at times.But she knows her son draws cartoons. Part of her daily routine is to open the @TimesTranscript and see her son’s cartoon.A cartoon that won’t be there anymore.

But the most depressing part of all of this has to be the realization that de Adder has now faced more consequences for Trump’s zero-tolerance immigration policies than anyone in that administration. No one in that administration has been held accountable for the deaths or for the separation of families or for the horrid conditions in the private, for-profit detention centers holding thousands of children.

(ETA: I missed this last week, but John Sanders, the Acting Head of Customs and Border Protection has announced he’s stepping down. Trump says he didn’t order his resignation, though he says that about most of his turnover.)

The only person that we know of who has lost their job over these policies is former Homeland Security secretary Kirstjen Nielsen, who was reportedly fired for not being willing to be awful enough to satisfy Trump.

De Adder’s firing comes just weeks after the New York Times announced they would be cutting all political cartoons from the newspaper. In a blog post, cartoonist Patrick Chappatte singled out one overtly antisemitic cartoon from April for triggering the decision.

“In April 2019, a Netanyahu caricature from syndication reprinted in the international editions triggered widespread outrage, a Times apology and the termination of syndicated cartoons,” he wrote. “Last week, my employers told me they’ll be ending in-house political cartoons as well by July. I’m putting down my pen, with a sigh: that’s a lot of years of work undone by a single cartoon – not even mine – that should never have run in the best newspaper of the world.”

Here’s what de Adder had to say of that decision at the time:

Obviously, these newspapers are free to hire and fire whomever they want. But if these decisions are being made to quash political criticism in general, that’s not okay. And if they’re doing so out of fear of retribution from the Trump administration–and we know Trump is fond of encouraging his supporters to retaliate against the media with everything from boycotts to physical violence–then that is an actual violation of both countries’ right to a free press.

But in the past 2 weeks I drew 3 Trump cartoons. 2 went viral and the third went supernova and a day later I was let go. And not only let go, the cartoons they already had in the can were not used. Overnight it was like I never worked for the paper. Make your own conclusions.