Kirstjen “Put Kids in Cages” Nielsen Has Left the Trump Administration. She Will Not Be Missed. 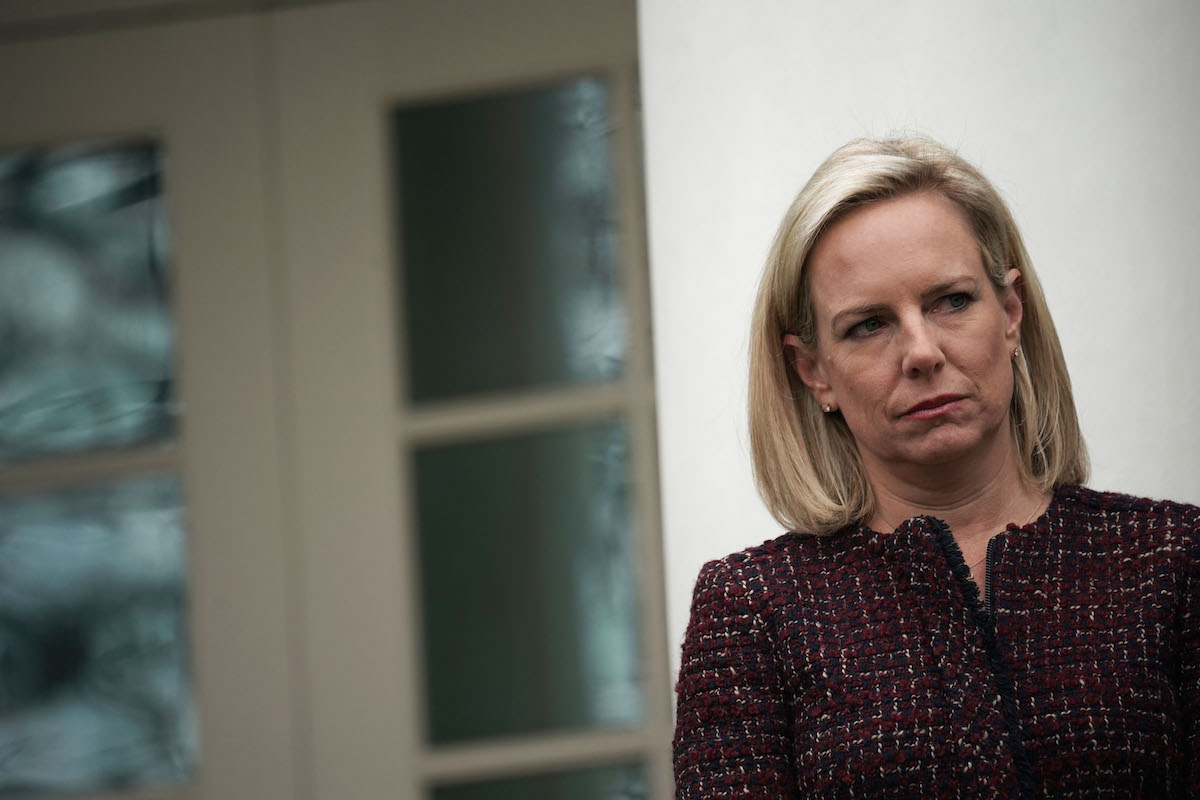 Over the weekend, Donald Trump announced that Homeland Security Secretary Kirstjen Nielsen was resigning. As with so many Trump appointees, that resignation is said to have Trump’s idea, not hers.

Nielsen may be out, but she has ensured that she will forever be known as the woman who separated families at the border and put children in cages. That’s her legacy, and she earned it.

.@SecNielsen separated mamas from their babies and locked little children in cages.

I’m not sorry to see her go. I only wish she’d been fired long ago, before she ever had a chance to resign.

Oh, does she want to spend more time with her family?

.@SecNielsen at least you’re leaving with your reputation intact

If she follows in the footsteps of other ousted Trump officials, Nielsen’s next steps will be to distance herself from Trump and the policies she enacted and enforced, to paint herself as a good person who was just following orders or who saw herself as a moral counterbalance necessary to keep Trump’s madness in check.

The only organization Nielsen should land at is The Hague. https://t.co/7yjYjofT9G

Kirstjen Nielsen will have a book deal and a think-tank job before you can say “kids in cages.” https://t.co/rfDWIJsv0I pic.twitter.com/TrptU97BiW

Best of luck to Kirstjen Nielsen. I’m not sure where you’ll get hired with a resume that includes “locking kids in cages.” I’m kidding, good luck at Fox News.

Fox News is, in fact, already working that beat.

this is so gross. kirstjen nielsen was not forced to serve as DHS secretary under Trump against her will. she is not secretly a good person. good people don’t work for Trump. don’t whitewash who she is and what she did: she willingly and happily carried Trump’s trash for years https://t.co/6lXJHEHFlb

pretty easy to make the nazi comparisons when they assert a “just following orders” defense https://t.co/bPzkFkhYOV

Kirstjen Nielsen should be forever remembered as the face of family separation. She was not a hapless victim of the Trump administration’s war on immigrants and asylum seekers, she was a leader in it. But it is also true that her leaving won’t change anything, or at least not for the better.

Word is that Trump (essentially) fired Nielsen because he wanted to go in a “tougher” direction on immigration. That was the reason he gave for abruptly dumping Ronald Vitello, his own nominee to lead ICE, just a few days ago.

Let’s be clear: This administration’s dehumanization and cruelty toward migrants will not stop after Kirstjen Nielsen leaves office. It is their principal policy.

Trump has reportedly been wanting to reinstate those large-scale family separations—a policy his administration initiated (no, Obama didn’t have a family separation policy) and then reversed under extreme public pressure last summer. He’s apparently been pushing for this since January.

EXCLUSIVE from @JuliaEAinsley and me: President Trump has for months now urged his administration to reinstate large-scale separation of migrant families crossing the border, according to three U.S. officials with knowledge of meetings at the White House.

Trump’s only got two ironclad programs: white supremacy and self enrichment. https://t.co/JsS85SyQPb

Nielsen reportedly opposed the reinstatement, but not because she’s such a good person.

As expected, Nielsen’s acting replacement is a man who has expressed some opinions on immigration that would make Stephen Miller smile.

Trump’s new pick for @DHSGov, Kevin McAleenan, is the one who ordered migrants to be teargassed last November at the border, including children. His claim: migrants seeking asylum are mostly criminals without legitimate claims for shelter. https://t.co/9xqVvzh8yV

We haven’t forgotten that Kevin McAleenan was CBP Commissioner when Jakelin Caal Maquin, a 7 year old asylum seeker, died in CBP’s custody. These folks are cut from the same cloth with the same agenda— extreme right, white nationalist. https://t.co/hnDW9wjOBa

The White House settled for Kevin McAleenan as its third pick after Sauron and Thanos turned the job down.

By the way, Trump’s appointment of McAleenan might actually be illegal, as it looks like he ignored a statute that determines the succession of acting officials in case of a vacancy. But on the list of Things Trump Has Done That Are Probably Illegal, this seems pretty far down.