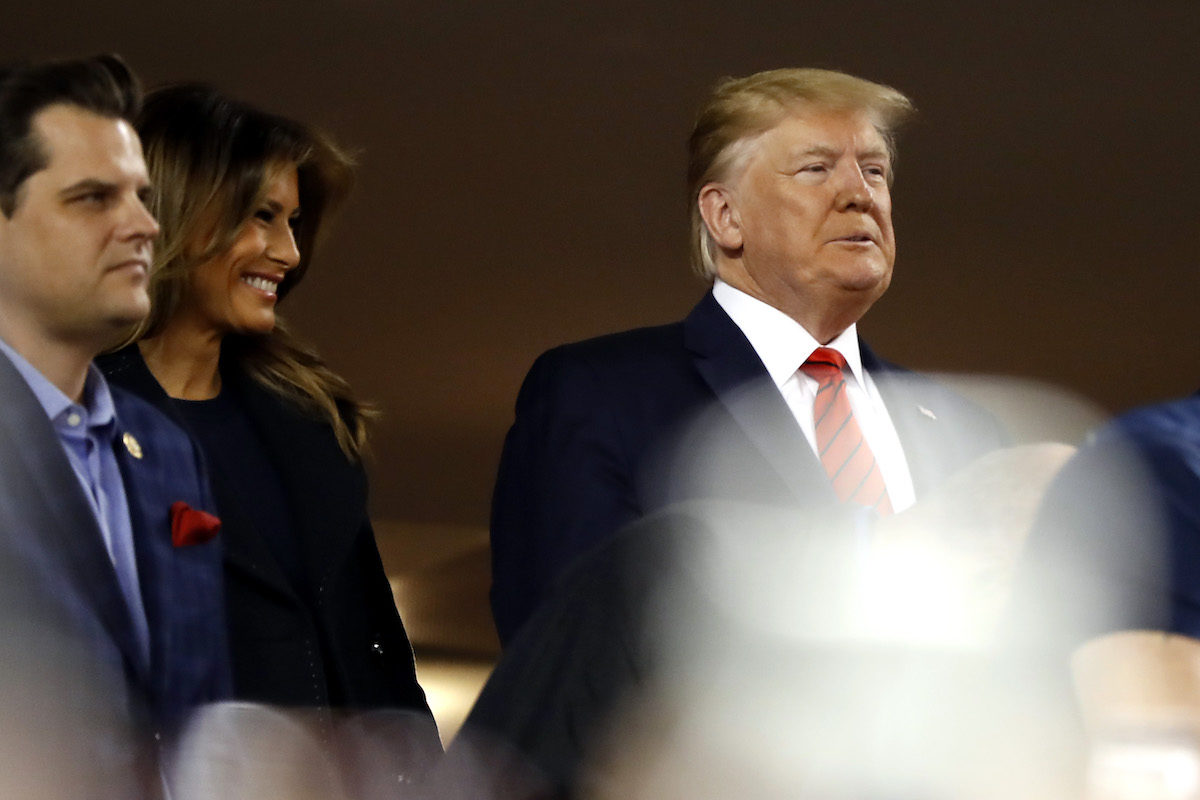 Over the weekend, Donald and Melania Trump attended Game Five of the World Series at Nationals Park in Washington D.C. (They also brought along a number of Republicans, including Matt Gaetz, who presumably earned his spot with last week’s embarrassing and sycophantic “protests” around House impeachment hearings.)

But when Trump’s presence was announced to the crowd, the 41,000 baseball fans in attendance (or at least a good number of them) switched from cheering to booing as soon as his face hit the jumbotron. You really do love to see it.

Look how Trump’s face changes when he realizes an entire stadium is booing him pic.twitter.com/E46rzbzmbl

Here’s a good angle of Melania appearing to realize they’re being booed before anyone else.

Okay this made my night

Trump getting booed by an entire stadium when he is introduced at the Baseball World Series.
pic.twitter.com/SNWcElCnuu

And a third angle of the whole stadium. This one is really fantastic.

Here’s video of Trump getting booed again, this time by the whole stadium. pic.twitter.com/ppRpQzWWap

Not only did the crowd boo the Trumps, but they launched into a spontaneous chant of “Lock him up,” which I guess Trump doesn’t love hearing outside of his own rallies.

Did you take the day off Twitter yesterday (as I did)?
Are you wondering why #LOCKHIMUP is trending?

People straight up chanted “LOCK HIM UP!” while he was on the Jumbotron. #mondaymotivation pic.twitter.com/JKelGcoFff

It was a truly incredible moment.

HAHAHAHAHAHAHAHAHAHA I hate to do a Simpsons “you can actually pinpoint the second where his heart rips in half” joke but you can LITERALLY pinpoint it holy shit i hope they show this in the detention camps at the border https://t.co/GQ3F0wRZlH

But as we know, something this good is just begging to bring out terrible hot takes. It was only a matter of time.

Enjoy the Trump gets booed discourse while you still can because it’s gonna get so fucking dumb real fast.

And when it comes to bad takes on good things, the hosts of Morning Joe are, as usual, first in line. On this morning’s show, Joe Scarborough called the chanting “un-American” and Mika Brzezinski called it “sickening.”

“We are Americans and we do not do that. We do not want the world hearing us chant ‘Lock him up’ to this president or to any president.” — @JoeNBC pic.twitter.com/9IgMCETBdn

“We are Americans and we do not do that. We do not want the world hearing us chant ‘Lock him up’ to this president or to any president,” Scarborough said, to which a whole lot of people responded, please STFU.

“Sorry Joe” has been trending all morning and that video above is getting Twitter ratioed out of existence.

Counterpoint: “there will be accountability for your crimes” is 100% the best message we could be sending to the rest of the world right now https://t.co/WZXd07epVp

I can’t believe we’re here but there’s a huge difference between rallies chanting Lock Her Up over imagined crimes of a political rival and a spontaneous chant of Lock Him Up by a crowd of disparate people recognizing the obvious, real crimes perpetrated by a criminal president.

I’m of the opinion that masses of people booing the president on one of the stupidly few occasions he’s ever been forced to interact with them is in fact an extremely valuable moment for our global standing & anyone who cares about America’s reputation should thank that crowd.

Crowds also booed Herbert Hoover at the World Series in 1931 because of the Great Depression. Baseball fans booing fuck up presidents is as American as it gets. https://t.co/I1NmnNJTUh

Tired: The right to offend is precious. Safe spaces are ridiculous. Suck it up snowflakes.

Wired: I mean, I never imagined they’d boo the president at a baseball game. What is even happening to this country?

Thank you, sir. There is atrocity worse in this world than a rich person being criticized

Ah I see Joe and Mika have decided to hold a stadium full of baseball fans to a higher standard than the president of the United States.

I spent a solid minute thinking of all the possible responses I could post to Scarborough’s ridiculous tweet, and I landed on this. https://t.co/3j2Wy88UsU

By the way, if you’re wondering why Trump didn’t throw the first pitch, it’s because that honor went to chef José Andrés, an outspoken critic of Trump. Andrés has frequently tweeted criticism of Trump, especially regarding his immigration policies. The two were also engaged in a two-year legal battle after Andrés pulled out of a restaurant deal in response to Trump’s insulting comments about Mexican immigrants.