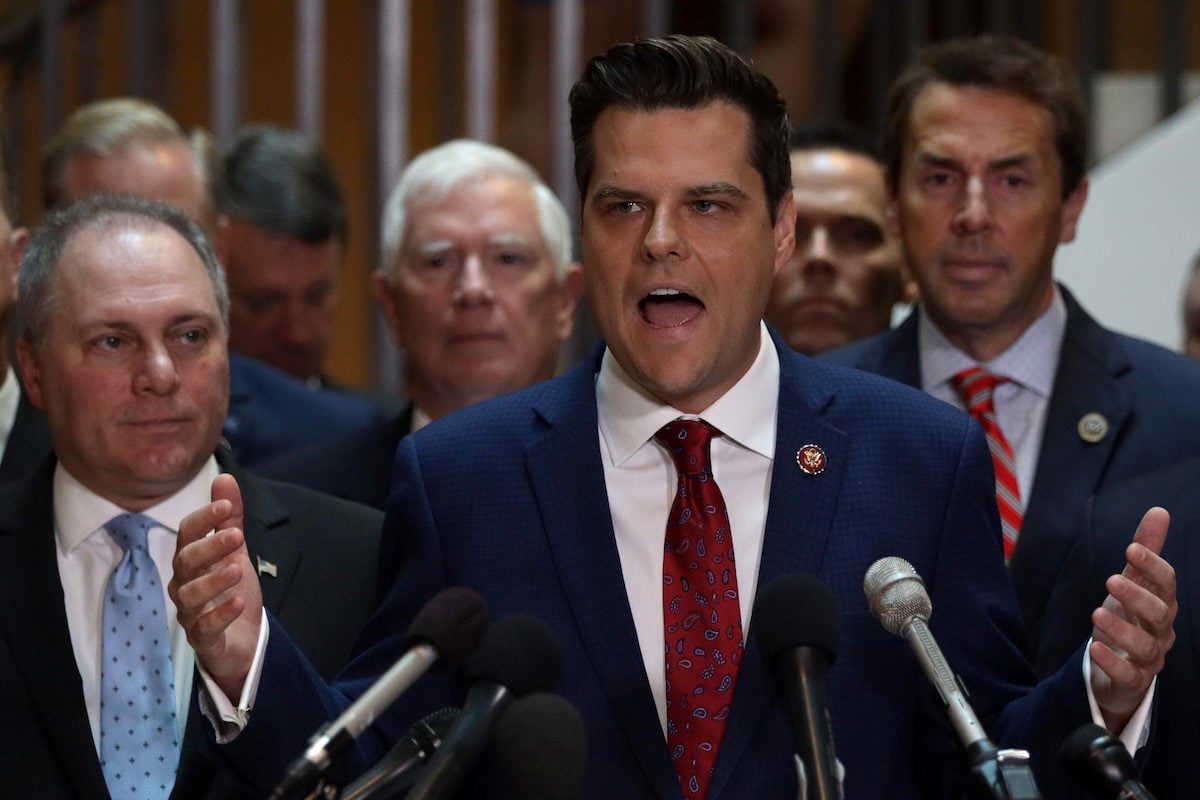 Last week, Florida Congressman Matt Gaetz tried to crash an impeachment hearing and then made a big fuss over being kicked out just because he doesn’t actually sit on any of the committees involved and therefore has no right to be there. Today, he’s trying it again, and he brought along about two dozen of his Republican colleagues, all of whom are apparently just as eager as Gaetz to out themselves as petulant idiots.

Deputy Assistant Defense Secretary Laura Cooper—a Pentagon official overseeing Ukraine policy—was sitting down to testify to the House Intelligence Committe when the Republicans reportedly came storming in through the room’s three separate doors. From there, a shouting match broke out.

Rep. Bradley Byrne of Alabama was yelling at House Intelligence Chairman Adam Schiff, but the California Democrat did not engage, the source said. Other Democrats, including Rep. Val Demings of Florida, shouted back at both Byrne and Republican Rep. Louie Gohmert of Texas, who were yelling about the process.

“It was the closest thing I’ve seen around here to mass civil unrest as a member of Congress,” according to a source in the room.

How do I stop the 30-50 feral hogs that run into my SCIF within 3-5 mins while my small kids inquire into impeachment? https://t.co/4OnhhurM7W

In addition to trying to enter a hearing they’re not a part of, many of the Republicans appear to have their cell phones, which are not allowed in the Sensitive Compartmented Information Facilities—the place they’re crashing. This may sound small, but it’s a HUGE violation, and they’re just flaunting that violation by actively tweeting it.

Storming the SCIF without respecting the security protocols that require people to leave their electronic devices *outside* the space, is actually compromising our national security.

Bringing electronic devices into a SCIF, and this SCIF in particular is *very* problematic, especially when done by members of Congress.

Because Members of Congress (and their electronic devices) are high-value targets for compromise by foreign intelligence services.

This may seem like a technicality, but everyone in the intelligence community knows that intentionally bringing a cell phone into a SCIF is a serious violation. It could cost you your job and your clearance. https://t.co/gr9tblPt5z

The Republicans were successful in delaying Cooper’s testimony. She left the room when the lawmakers refused to. They then proceeded to try to order pizza. I’m not sure if that attempt was successful, but thoughts and prayers to them.

Gaetz and other Republicans have complained about being left out of “secret” impeachment proceedings, but there are tons of Republicans on the committees involved. As Politico notes:

In reality, more than 45 House Republicans—nearly a quarter of the House GOP conference—already have full access to the depositions through their membership on one of the three panels leading the impeachment inquiry. During the depositions, Republican lawyers are given the same amount of time to question witnesses as Democratic counsels.

So they’re just there for the spectacle and the disruption. “It’s a bunch of Freedom Caucus members having pizza around a conference table pretending to be brave,” Rep. Tom Malinowski told reporters. “All they basically did here was to storm a castle that they already occupied.”

California’s Rep. Ted Lieu says, “When you don’t have the law or the facts, you attack and disrupt the process. And you may wonder why is it happening now? Because Bill Taylor gave a devastating opening statement yesterday. They’re freaked out. They’re trying to stop this investigation.”

Rep. David N. Cicilline said the Republicans were “playing to an audience of one”—meaning Trump—which is definitely true and appears to be working, as Trump has been tweeting about the pointless protest all afternoon and attacking those not showing him enough support.

The Never Trumper Republicans, though on respirators with not many left, are in certain ways worse and more dangerous for our Country than the Do Nothing Democrats. Watch out for them, they are human scum!

Speaking of “human scum,” Trump reportedly knew about the stunt before it happened and encouraged it, even though (or, let’s be honest, probably because) Nancy Pelosi was away attending her brother’s funeral.

Nancy Pelosi is at her brother’s funeral. That’s why Gaetz and crew chose this day to commit a Federal crime in an attempt to block a lawful deposition — despite the fact that 46 Republican representatives are perfectly free to attend it.

These people are beneath contempt.