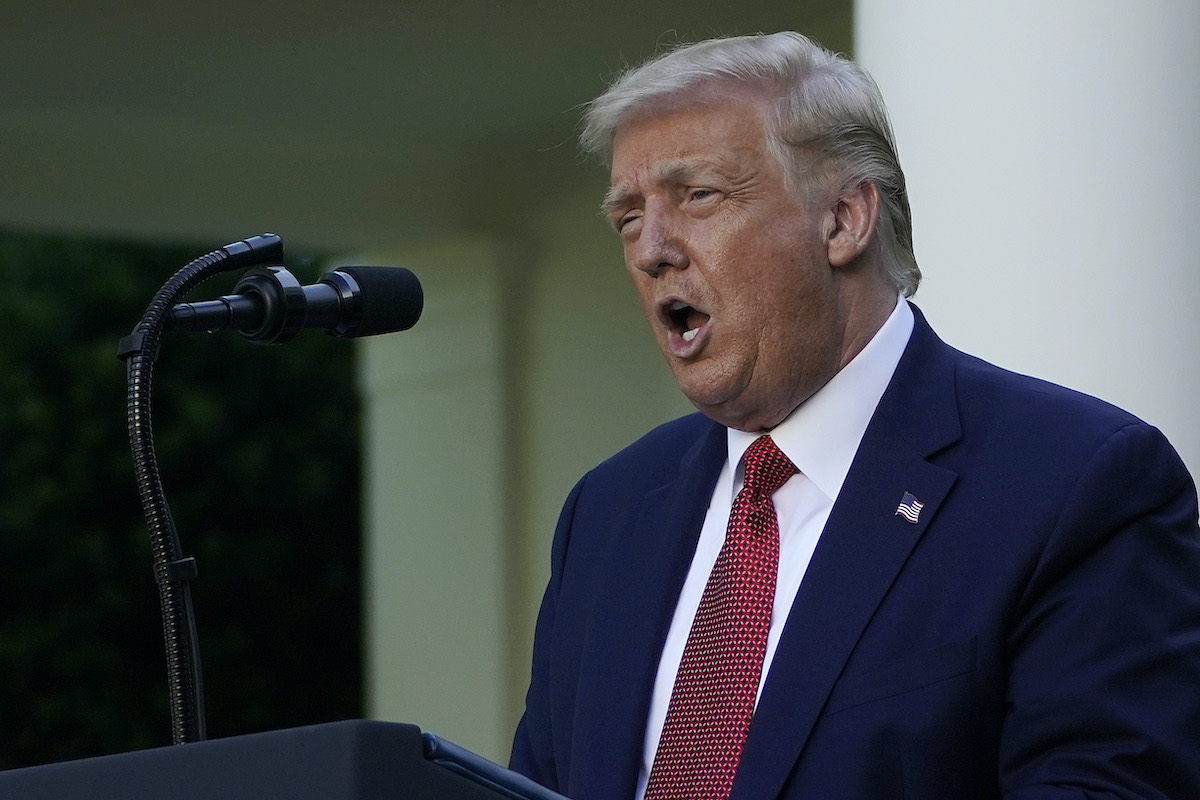 Donald Trump called a press conference with reporters Tuesday evening, ostensibly to talk about China and its treatment of Hong Kong. But the real purpose of the briefing was to rail against Joe Biden.

For about an hour, Trump basically held a campaign rally in the White House Rose Garden. He started by talking about how Biden has been “a gift” to China before leaving the subject of China behind entirely, moving on to how bad Biden has been for U.S. factories, for infrastructure, for the military. He brought up the swine flu. He brought up Hunter Biden. He brought up Alexandria Ocasio-Cortez (“a young woman—not talented, in many ways”) and Bernie Sanders (“Good base, but that’s about it”). He ranted about their environmental and immigration plans and said they “want to abolish our prisons.”

Just in case there could be any doubt at all that this was a campaign speech, he ended by saying, “there’s never been a time like this, where you’ve had an election of people so different.”

It’s not clear what exactly drove Trump to bring reporters in for an unofficial rambling rally but there’s a lot to choose from. The “press conference” (during which he only spent six minutes answering reporters’ questions) came the same day his niece Mary Trump’s tell-all book was released. Biden was getting substantial news coverage after releasing a $2 trillion plan to reduce carbon emissions earlier in the day. Trump has been receiving criticism this week for reportedly shutting Dr. Anthony Fauci out of White House coronavirus task force operations. And on top of all of that, he had to cancel a planned rally in New Hampshire this past weekend due to … “weather.” (The weather was fine; the more likely reason was fear of low turnout.)

The Hatch Act, which is supposed to prevent federal employees from endorsing political candidates, including campaigning themselves, doesn’t apply to the president. However, he’s not supposed to use federal funds for campaign events, which he very much did here. So at best, this is a major breach of protocol and established norms and at worst, it’s illegal.

Not for nothing, but Trump using the Rose Garden to give a campaign speech assailing Biden is definitely illegal and his campaign owes the taxpayers a lot of money for this event.

In interview with @realDonaldTrump, @CBS_Herridge asked the president why he thinks African Americans are still dying at the hands of law enforcement in this country. His answer is revealing. See more on @cbseveningnews and @cbsthismorning. pic.twitter.com/6VQFpqB8AT

Technically, Trump may not be wrong. Police departments aren’t required to release comprehensive data on killings but according to a number of studies, more white people are killed by the police than any other demographic. But because Black people make up a smaller percentage of the U.S. population, they—especially Black men—are much more likely to be killed by the police—about three times more than white people. (His response also ignores the deeply ingrained foundation racism in the U.S. police force.)

It is true that police in the US also kill a lot of white people which is…not really necessarily a super awesome debating point in the police’s favor?

Herridge also asked Trump if he understands that the Confederate flag “is a painful symbol for many people because it’s a reminder of slavery?” He does not. He says people don’t even think of slavery when they look at the flag, they think of NASCAR. “I just think it’s freedom of speech,” he said, “whether it’s Confederate flags or Black Lives Matter or anything else you want to talk about, it’s freedom of speech.”

CBS: “You understand why the [Confederate] flag is a painful symbol for many people because it’s a reminder of slavery?”

Trump: “Well, people love it, and I don’t view– I know people that like the Confederate flag and they’re not thinking about slavery. I look at NASCAR.” pic.twitter.com/zKkmJDQaRX

Yup, that’s the president putting a symbol of slavery, violence, and systemic oppression on the same level as the people asking not to be subjected to systemic oppression. Also, we can all guess how it would go down if someone brought out a BLM flag at one of his rallies. Do we think he’d still be defending their “freedom of speech” then? We do not.