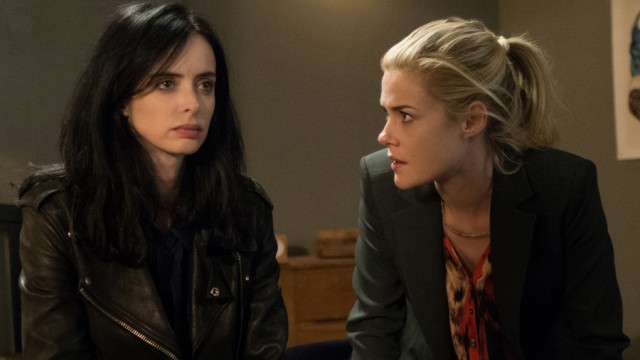 By now, most of you have hopefully seen and/or heard of Netflix’s latest addition to their glorious five-year-plan Marvel Defenders crossover, Marvel’s Jessica Jones, and if not, you should change that right now, damn it. Being one of those weirdos who just had to binge it all in one go, I’ve been waiting all this time to get to talk to all of you about a particular character on the show that I may have fallen madly in love with. No, it’s not leads Krysten Ritter and David Tennant as Jessica Jones and Kilgrave respectively (although TMS has a very good article on the fandom that has popped up around Kilgrave and how it is both culturally fascinating and sadly par for the course that such a despicable villain can inspire revulsion and admiration at the same time), or Mike Colter getting an early-bird cameo as Luke Cage, although all three of them are spot-on badasses. It’s not even Carrie Ann Moss’ Machiavellian performance as Jeri Hogarth, a role my housemate compared to Robin Wright’s Claire Underwood from House of Cards, albeit with more “looking for the car keys,” if you follow me (and if not, Lea Delaria has you covered).

No, the focus of this piece is Rachael Taylor’s standout performance as Patricia “Trish” Walker, and why, in this writer’s humble opinion, she is actually the secret weapon of the show’s considerable cast of supporting roles. Allow me to elucidate.

First, some background information for those not up to speed: Much in the same way JJ’s Trish is introduced to us as a former child star who has grown into an adult life as a celebrity, the comic book Patsy Walker started life as a civilian character in a 1944 issue of Miss America Magazine published by Marvel predecessor Timely, before making appearances in Teen Comics and Girls’ Life and getting spin-offs of her own. Her support cast of boyfriend Buzz and brunette rival Hedy were essentially knock-offs of Archie Comics, but the characters remained in print well into the ’60s and eventually made the transition into Marvel continuity via a cameo appearance in Fantastic Four Annual #3 in 1965; it was later established in The Defenders #89 (Nov. 1980) that Patsy’s earlier stories were fictional works published within the Marvel Universe itself, and written by Patsy’s mother Dorothy Walker based on Patsy’s own life and friends. Holy metafiction, Batman!

So anyway, after making the transition, Patsy dumped her useless husband and became associated with superheroics through her friendship with Hank “Beast” McCoy, gaining an ability-enhancing suit from Greer Grant aka the Cat, and took on the superhero identity Hellcat; she subsequently goes on adventures with the Avengers, partners with cosmic anti-heroine Moondragon, gains and loses psychic abilities, works with Doctor Strange, joins the team The Defenders, and ultimately ends up married to Daimon Hellstrom, the Son of Satan, only to be driven insane, commit suicide, and become trapped in Hell because her mother sold her soul to the Devil amongst other things. Yikers.

In the Alias comic books that inspired the show, Jessica’s best friend was one Carol Danvers, but since Carol is set to appear in the MCU as Captain Marvel somewhere down the line, showrunner Mellissa Rosenberg elected to use a different character in the same role, and in making this decision it actually gives the character more depth: Trish does not have powers (not yet, at least), so when something scares Jessica, it scares Trish just as much, if not more.

Source material is all well and good, but non-powered allies to superhero leads are nothing new, and the real genius of Trish’s role in JJ is how her arc in the show works in tandem with that of Jessica’s. The two are adopted sisters and vitriolic best friends, red and blue onis, chalk and cheese. Both have suffered trauma and abuse—Jessica losing her parents and being manipulated by Kilgrave, Trish suffering the pressures of being a child-star with a controlling mother. Whilst Jessica deals with her problems by numbing herself with alcohol and isolating herself, Trish is relatively straight-edge, hints of a wild past notwithstanding. On learning of the return of Kilgrave and all that it forebodes, Jessica’s first instinct is to flee as fast and as far as she can, and on Trish’s dime no less; Trish, on the other hand, has turned her penthouse into a fortress and learned Krav Maga. Plus, Trish is a sassy independent woman who don’t need no man telling her what to do. Or, y’know, trying to kill her.

Of course, this doesn’t stop her taking a serious beating at the hands of Officer Will Simpson, and throughout the plot, she repeatedly wishes that she could do what Jessica is able to. In the eleventh episode, “AKA I’ve Got the Blues,” she finally gets her wish.

After capturing and then losing Kilgrave, as well as being forced to put a bullet in her head, Trish then has to deal with the fact that Simpson, who has gone from being her attempted murderer to an ally and lover, has finally gone off the deep end, taking performance enhancing drugs to fulfil his all-consuming desire to murder Kilgrave, regardless of who gets in his way. Whilst Trish never makes excuses for his behaviour, she only realises when it’s too late that he has become an unstable, homicidal nutcase with a misplaced defensiveness of her, and he’s got it into his head that Jessica is the one standing between him and Kilgrave.

Hoo boy. In a series that had no shortage of crowning moments of awesome, easily this writer’s favourite is the scene of Trish confronting Simpson, using his red pills against him to beat him back long enough for a wounded Jessica to recover and literally fridge him.

I can’t speak for the rest of the viewers out there, and certainly some have made comments regarding the pacing of the series vis-à-vis the secondary plots, but the conclusion of Trish and Simpson’s love-hate relationship complements the Jessica-Kilgrave dynamic perfectly. Both Jessica and Trish are placed in situations where their autonomy, safety, and identity are threatened by possessive, obsessive men, and while Simpson’s actions seem to be borne of concern rather than Kilgrave’s self-centered sociopathy, it becomes clear as the series unfolds that he was damaged and morally compromised even before Kilgrave made him “kill” Trish in his first appearance. He’s impulsive, hot-tempered, and his vendetta leads him to being prone to dishonesty, paranoid, and willing to torture and kill—a deadly combination.

While the jump from Simpson’s introduction as a disposable mook to his almost immediate reversal to a penitent ally and potential love interest may have thrown some viewers, including myself, earlier on in the show, the creators and writers never lose sight of the fact that not all potential abusers are card-carrying, mustachio-twirling, gas-lighting megalomaniacs; more often than not, they’re insecure, damaged people wishing to reassert control over an uncaring world in the only way they know how, and while being in law enforcement or the military doesn’t automatically make you a hateful wife-beater, it provides the perfect storm where trauma is almost a certainty along with dehumanization of the enemy, violent behavior as a means to an end, and an institutional vested interest in not dealing with the fallout those things entail.

With the addition of the drugs that give him his enhanced combat abilities, Simpson takes the plunge into full-blown psychopathy; Albert Thompson at one point mentions, “You can grow someone’s strength or power, but you can’t grow a corresponding conscience. There’s no pill for that.” This acts as a reprise of the moral lesson Erskine passed on to Steve Rogers before his own transformation into a super-soldier: “The serum amplifies everything inside, so good becomes great; bad becomes worse. This is why you were chosen. Because the strong man who has known power all his life may lose respect for that power, but a weak man knows the value of strength and knows compassion.”

Gender pronouns notwithstanding, the same is true of Trish; when she makes use of the pills at the risk of her own life, she does so not for revenge as Simpson did, but to protect her friend, Jessica, without whom there would be no possibility of stopping Kilgrave. What follows is a sequence of Trish fighting off an attacker she couldn’t previously damage in any noticeable way, revelling in the rush it provides her, before instantly being brought back down to Earth by her body not yet having a tolerance for the chemicals and having to be rushed to hospital. Crucially, she survives, and the recovery process is noticeably brief. Bob Chipman has talked before about the surprisingly strong feminist subtext of She-Hulk, and Trish’s heroism follows the same example: Chipman states that in “the vast majority of formulas and tropes in classical myth-making that informs the Western storytelling tradition, power fantasy is split decisively on gender lines: male characters who do get power can be destructive if they abuse it, but female characters with power will be destructive period, often as part of reinforcing a broader theme of female power being itself unnatural,” and female characters who gain power at no meaningful personal cost or risk of misuse were and continue to be the exception rather than the rule.

This would all be well enough, but at the same time, we are shown the reason Trish would lay down her own life for Jessica. Growing up under the thumb of an abusive stage mother (referred to throughout the season up to that point with dread and disgust), Trish’s time as child actress “Patsy” was characterised by itchy red wigs and parental assault with People’s Choice Awards. When she discovers her adoptive sister’s powers, the two swear an oath that Trish will not tell on Jess, and Jess will not intervene in Trish’s abuse. However, when Jessica catches Trish’s mother trying to force bulimia on her, she breaks her promise and defends her sister, leading them to become closer and warmer.

This culminates in the season finale where the ultimate test of Kilgrave’s powers, and the question of whether he truly has Jessica under his thrall once more, comes when he tries to abscond with Trish. When Jessica convinces him of his renewed hold over her by allowing Trish to be taken away from her by Kilgrave, she tips her hand to Trish by saying a key pre-arranged phrase that she would never normally say—her saying “I love you” to Trish—before seizing Kilgrave by the throat and breaking his neck, and with it his control over New York’s citizens. In summation, Kilgrave is defeated, and a community is delivered from evil, by the love of two sisters for each other.

Adam X. Smith is just a poor boy who needs no sympathy. No, scratch that—he’s actually a subterranean homesick alien sleeper agent who has been sending coded messages hidden in online reviews and articles back to his extra-terrestrial masters for several years now, whilst attending the puny humans’ University of Lincoln, which recently had the incredibly poor judgement to award him a Bachelor’s degree in Drama and accept him into their MA program. You can find some of his previous transmissions to the mothership on CHUD.com and Bleeding Cool, where he writes with the Thor’s Comic Column crew, and more recently on Electrolyte. He tried using Youtube vlogs and fanvids as a means of sending subliminal messages but was thwarted when his SD card ended up in the laundry. He has a Twitter account that he never bothers with and a Tumblr that is gathering dust—you may pester him on them if you so wish. Also, he misses his wife and family very much.