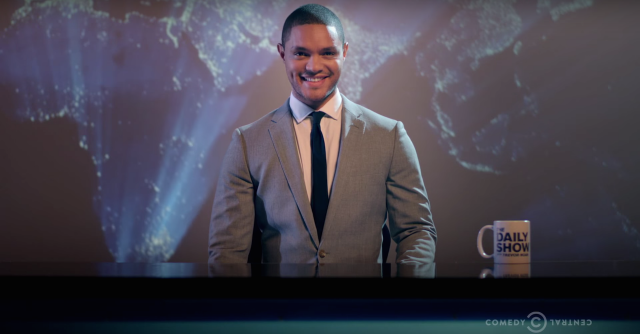 Trevor Noah, who was featured in a photo spread in Vanity Fair alongside all the other late night show hosts, shared his thoughts on the spread as well as women in the greater world of comedy. In an interview with Newsweek, he argued that women are more powerful than men in comedy right now.

To him, the strongest voices and works are coming from female comedians and actresses. He said:

I don’t agree with the notion that there are no women in comedy. I would even argue that women are more powerful than men in comedy right now. If you look at the top comedy actors, Melissa McCarthy by far is killing most of the numbers of other actors. You look at Amy Schumer right now—I would argue that there is no more preeminent voice in comedy. Tina Fey, Amy Poehler, their movies coming out…

While lauding the work of these undeniably prolific comedians, he acknowledged the Vanity Fair spread’s shortcomings while urging people to also enjoy the progress that is being made therein. He said:

Yes, that Vanity Fair [spread] is all men, which is what it is. But I guess what we need to look at is how is that evolving? The first step in that is you go: OK, there’s two men of color. That’s a big jump. Pretty soon there will be a woman that’ll be added to that. And there will probably be more women, which is gonna be fantastic. And over time, that’ll happen; it’s a conversation that we need to continue having.

To be completely honest, I had some mixed reactions to this whole thing. While on the one hand it’s nice to see him praise the hard working women of comedy, it’s equally as troubling to note that his answer came off as a bit mansplain-y. Additionally, there were no women of color on that list. I want to be clear: that last bit says a hell of a lot more about the industry itself than it does about Noah.

His urging towards enjoying the progress is a valid one. Two men of color are now counted in the historically white-dominated late night ranks. And very soon, a woman will be joining them: Samantha Bee now has her own show on TBS. In fact, she (so rightfully) owned the photo spread when she posted this rad (and incredibly accurate) Photoshopped version:

But her exclusion in the first place kind of signifies everything that’s wrong, doesn’t it? Sure, her show won’t debut until January (which isn’t all that far away), but she arguably deserves a spot on that spread. Even Noah mentioned that in his answer to Newsweek. It’s disappointing that change has to come so slowly, so piecemeal. It’s nice to enjoy the changes that are there, but as Noah rightfully points out: it’s a conversation that we need to continue having.