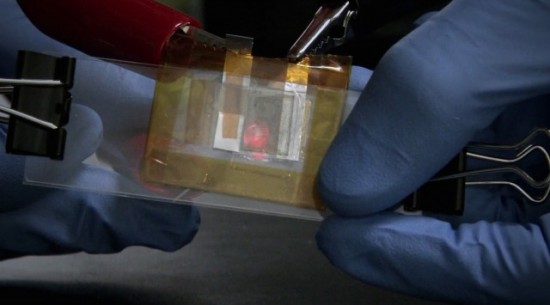 We may not have technology used in futuristic movies just yet, but now we’re one step closer: Researchers at Stanford University have created the transparent battery, a component that would be required to power, for example, a fully-transparent display. Stanford materials science professor Yi Cui, who led the project, says some battery components are easier to make transparent, citing the electrodes as the difficult part. Producing an electrode thin enough (around 100 nanometers) can make it transparent, but then it wouldn’t store enough energy, so Cui designed the electrode in a pattern that is too small for the naked eye to notice, thus achieving transparency. Though the pattern is too small to see, it is still using enough electrode material to store a usable amount of energy.

Due to the delicacy of the components, Cui and his team used a clear polymer called PDMS to hold the electrodes, made via a process that begins with using lithography to make a mold on a silicon wafer, then they pour the liquid PDMS over the mold, and cure the polymer. After peeling the PDMS polymer off of the mold, the sheet is engraved with a grid of channels, and is filled in with a solution holding the electrode materials. Then, to complete the battery, the researchers put a clear gel electrolyte between the two electrodes and put the resulting object inside in protective plastic wrapping.

Cui says there is a trade-off between the amount of energy able to be stored and the amount of transparency, because the thicker the electrodes, the less light will be able to get through, and his transparent batteries should be able to hold half as much energy as one that is opaque. Currently, Cui’s prototypes can store 20 watt-hours per liter, but Cui feels he can make the batteries hold more energy by making the polymer thinner, as well as digging deeper channels in which the electrode materials reside.